Posted by Simon on March 09, 2009
As someone who enjoys numbers I like to have an idea of my progress in my hobby. To that end, I keep track of what I've been painting (using a points system) and the money I've spent on the hobby every month. I stole both of these ideas from lone pilgrim and so far they've been very helpful to me.

Every month I budget $50 for my hobby. At the end of each month if I have any money left over I roll half of that money forward and lose the other half. At the beginning of February I had $15.18 in the fund and since I didn't buy anything, I'm going to lose half of that. Combined with the new $50 for March my current hobby funds are $57.59.

Painting for Points (title stolen from From The Warp)

Every model I paint has a point total associated with it based on the following scale:
In February I painted the Captain of my Crimson Fists and a six man assault squad for a total of 7 points. My total for 2009 includes another seven Khador infantry models for a grand total of 17 points done this year.

Last night I sat down and finished off my Greylords. 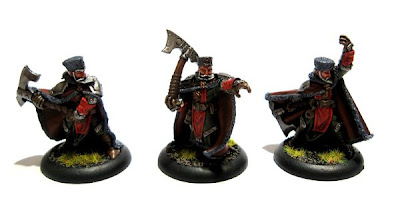 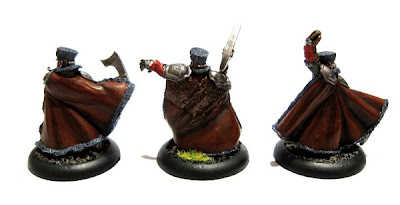 Their faces turned out a little weird but I had a lot of fun with their beards and eyebrows. All that I have left for the Khador army is the Koldun Lord but I'm going to put him on hold and try my hand at a Rhino next.
khador new model fund painting painting for points warmachine