Posted by Simon on April 22, 2009
I know I'm supposed to be working on my drop pod but after reading the newest White Dwarf's Imperial Guard preview and getting a good look at the new codex I just had to do some painting. Combined with me taking yesterday off from work to relax after running the Boston Marathon on Monday , we have this fellow: 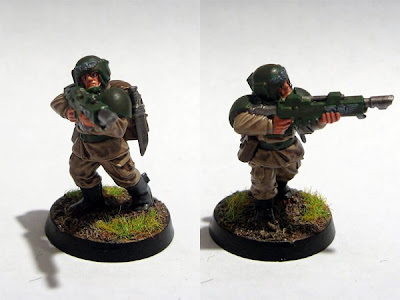 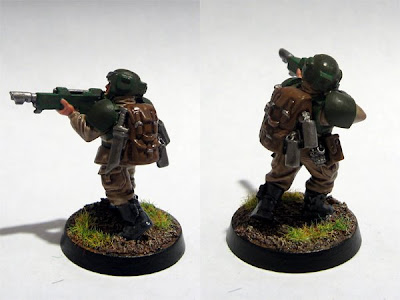 He isn't a masterpiece of painting by any means but he does represent what I hope is a very good mix of quality and speed. Most of the colors here are the result of a good base coat and either a single highlight (the green aroumr) or heavy wash (the boots, metals, leather, and fatigues). The only part that received more attention was the skin, which I did with a base, wash, and highlight.

Since this was my gesso test model he was primed white - a mistake I will not be repeating for anyone else in this army. Having a white base forced me to be really honest and meticulous while painting this guy, which is something I want to be able to avoid while doing this army. Aside from that little snag the only thing I'm unsure about is the armour highlight color I chose. I wanted to avoid mixing paints if I could but I think I'll probably end up doing it for the armour.

I mentioned earlier that I got a look at the new codex and I have a few ideas about building a list. Anyone who has some Guard experience, please (please) chime in and tell me if these are actually good ideas or if I'm being stupid.

Company Command Squads
This unit can give more and better orders from a longer range than the platoon command squads, so my priority is to keep them alive and yelling orders. To that end, I'm thinking about something like this:

Command Squad with
medi pack - Feel No Pain will help everyone survive
standard - the company banner allows you to reroll failed pinning and morale tests for any units within 12"
vox caster - this helps make sure those orders get followed
plasma gun - to give the squad some teeth
Chimera - this will keep the squad safe, mobile, and extend the order range ever further
Master or Ordnance - I'm on the fence about this guy because the template ALWAYS scatters and it can only be used if the squad didn't move

I imagine this squad riding behind my gun line of platoon and veteran squads giving orders and generally bolstering my men, while ocasionaly dropping a template of fun on the enemy.

All told, including the Master of Ordnance, this squad comes in at 200 points. That seems pretty steep to me. I can cut out almost 50 points by dropping the Master and plasma gun but then the squad has a lot less offensive capabilities on its own.

Platoon Command Squads
These guys can give fewer orders per turn, have fewer options for the orders they can give, and have a shorter order range. They're still useful but more disposable than the company HQ. I'm looking at two options:

Both of these are designed as counter punch units. If something manages to assault my lines, these squads have the firepower to be punishing. The flamer squad is going to hit more models and be cheaper while the plasma squad has fewer shots that are more effective, but at a higher cost. I'm leaning towards the flamer squad because it has the potential to be more devastating and I can add another flamer cheaply for even more destruction. Given the essentially suicidal nature of my role for these guys, I think cheaper is better.

Veteran Squads
I love that these guys have a higher ballistic skill and can take lots of fun guns. There is also a really nice special character upgrade that allows you to issue an order to your own squad, including the twin-linking one. That means that a squad with this guy doesn't have to be within the order range of your HQ squads to receive this order.

This squad is 245 points, which is a bit steep. However, they have a nice Ballistic Skill, 3 melta guns for some serious punch, can twin link the melta for some hurt, and have a Chimera and Carpace Armour to stay alive. There is an option to drop the Grenadiers to save points, swap melta for plasma to change roles, or put them in a Valkyrie to help put them where they're needed. I really like the idea of this squad.

HQ:
Company Command Squad, as above
see above for tactics

Elite:
full Psycher Battle Squad in Chimera
these guys will drive around, safe in the Chimera, shoot from it, and cause general mayhem
some Ratlings
possibly work with the Psychers to pin units, but more for crowd control and big things (also, I love snipers)

Fast Attack:
2 Scout Sentinals with lascannon and smoke launcher
probably outflank and hopefully pop something important with the lascannons

This should get me around 1500 points. Thoughts?
imperial guard painting warhammer 40k