Posted by Simon on May 01, 2009
My flight to Baltimore leaves in seven days and until two nights ago I hadn't made any progress on my drop pod. Since I'm dead set on using it against Spoony when we play, and it isn't a model that I can assemble and paint later, I've started to work on it. 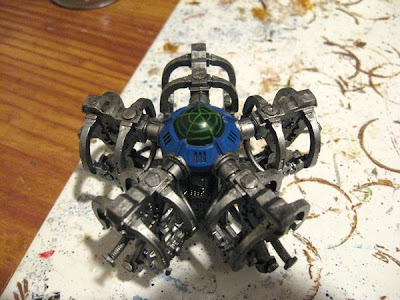 It isn't much to look at right now but I think this is the most complex piece. Most of the other stuff (bottom, doors, and fins) is made of large, flat pieces that shouldn't be too hard to paint quickly. I'd like to have the floor done this weekend and then get cracking on the doors and fins next week.

New Model Fund
April began with $50.88 and I quickly used it to buy my new drop pod and some Sternguard for $51.98. This puts my fund at -$1.10 + $50.00 = $48.90 for May. Games Day preparations necessitated me buying an army transport for $62.99 so I'm already clean through money for this month. However, I'll probably end up buying some Forge World goodies at Games Day because, well, they're just awesome models. My short wishlist includes the Cadian Upgrade pack and an Executioner turret.

image from Forge World
Painting for Points
This was a very slow month for me - the only model I've painted was my Guard test figure. One point added to my yearly total brings me to 42 points in 2009.
crimson fists games day new model fund painting painting for points warhammer 40k