Posted by Simon on May 07, 2009
This was quite an adventure but I've finally finished (sort of, there will be some more work done later) the drop pod! I followed the BoLS tutorial on drop pod assembly but I'd like to offer some of my own advice from the experience - I'll highlight some major sticking points in bold.

I built the major pieces of this model (harness system, doors, engine) and painted everything separately. This was a huge pain and I didn't enjoy it at all but I can't think of a better method to paint it. This alone may deter me from doing another one of these. 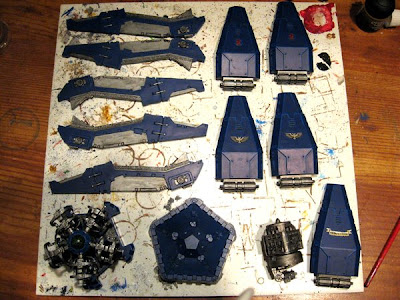 all of the painted pieces

In the above picture you can see that the harness structure has been glued to the base already - this is the first step in the assembly process. Do your best to push the little tabs on the bottom of the harnesses fully into the slots on the base. I ran into some problems with the structure being about a millimeter too high later on when I tried to attach the fins.

The next step is to glue the previous piece to the bottom piece with the doors in the correct slots between them (don't glue the doors!). 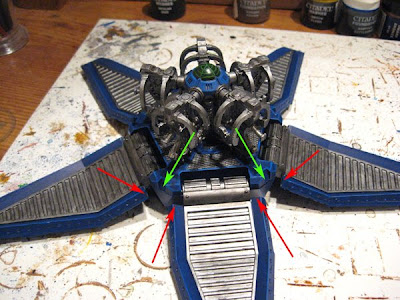 Two things to note here:
This is the end of the easy parts. From now on you should be dry fitting pieces at least twice before gluing anything. Grab a fin and dry fit the engine block to the top. Take this piece and put the fin on the base, making sure that the hose fits into the appropriate slot on the fin. Grab a second fin and put it into one of the two adjacent spots. Remember, we haven't glued anything yet. Make sure you can raise and lower the door that is between the two fins. If everything seems to be good, take it apart, and try it again - once you've put some glue down you won't have much time to adjust or move pieces around so it's worth making sure you know how everything fits together. 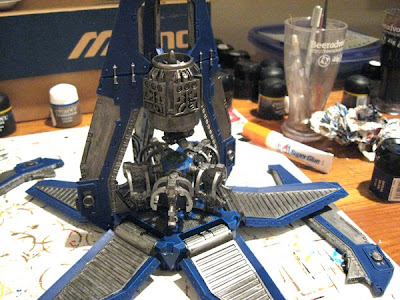 three fins are done here but you get the idea

If you're confident, glue the engine block to a fin, the fin to the base, and the second fin to the block and base. Use the three doors that surround these fins to help stabilize them while the glue dries.

Attach the last few fins to the base and engine block and you're done! 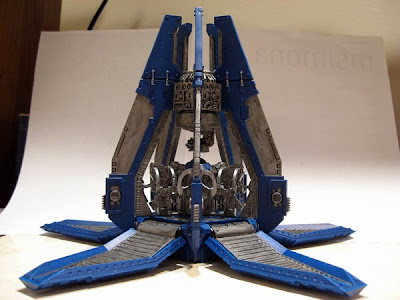 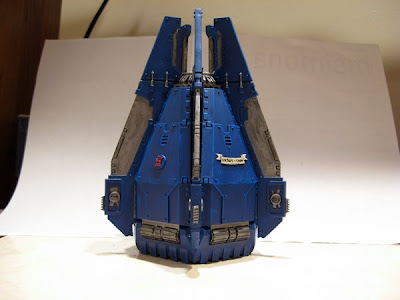 Once I get back from Games Day I'd like to try adding hazard stripes to the inside of the doors and do a little weathering to the outside of the pod. 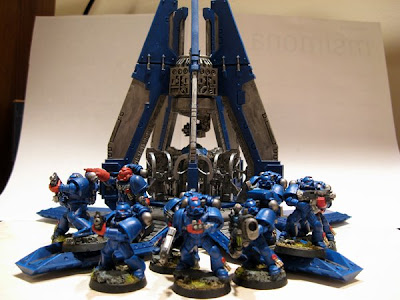