Posted by Simon on August 07, 2009
After the first game ended we both had too much fun to stop there. We were using only my limited collection so we had to get creative in bumping our lists to 1500 points for the second game. I don't have any more Tau so we dug out my Blood Ravens and Spoony added 500 points of those to his list, while I was able to add 500 more points of Crimson Fists.

Spoony's List (Tau and Blood Ravens):
My List (Crimson Fists):
We rolled Annihilation with Pitched Battle. I won first turn and gave it to Spoony.

He deployed the Deathrains, the large Fire Warrior squad, the Tactical squad, and infiltrated the Stealths and the large Scout squad. His other units were Deep Striking or coming in from reserve.

I reserved everything. My idea was to prevent him from shooting me as much as possible but I don't think this worked at all. I didn't have any more of a plan than that and I'm sure you can guess how this is going to end. 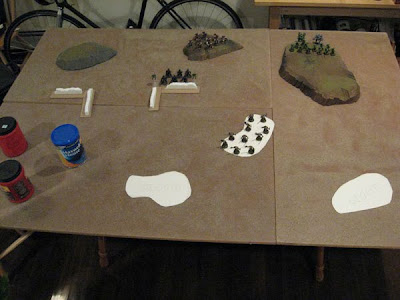 pre-game deployment
Tau 1
The Deathrains and Fire Warriors take over the big hill.

Crimson Fists 1
The Drop Pod comes down and obliterates the Stealth squad. This would have been an OK decision if there were no more units coming on but I totally forgot that very soon there would be a ton more Tau coming and they'd probably demolish me next turn.
Simon 1, Spoony 0 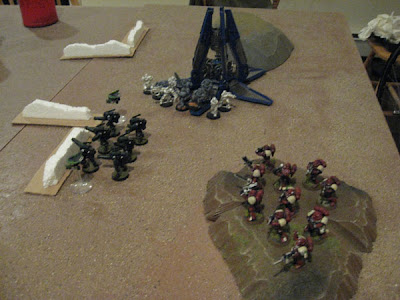 Tau 2
A small Fire Warrior squad, the Piranha, and 3 Fireknives arrive from reserve or Deep Strike. The big Fire Warrior squad kills 1 marine, the small squad kills 2, the Fireknives account for 3, and the Tactical Squad kills another 1. The Piranha explodes the Drop Pod and an eighth Sternguard ends up dead in the blast. The tactical squad assaults them and everyone fails to wound everyone else so the combat is drawn.
Simon 1, Spoony 1 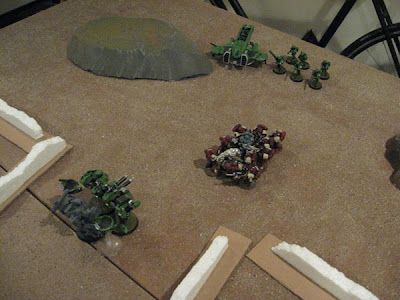 the grand melee
Crimson Fists 2
The Dread and plasma tactical squad show up. I kill a single scout with the storm bolter on the Rhino and miss with the Dread. Over on the other side, the Sternguard manage to kill two marines while only losing one but the Blood Ravens hold.
Simon 1, Spoony 1 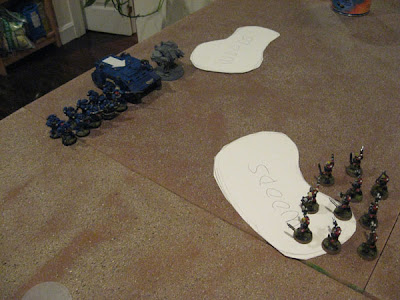 first round of reserves

Tau 3
The other scouts outflank on the wrong side of the board. The large scout squad begins to run away from my marines and the Deathrains kill my Rhino and knock the assault cannon from my Dread. The Blood Ravens are finally able to drag down my last Sternguard.
Simon 1, Spoony 3 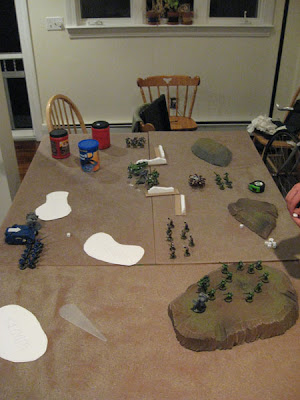 the board at the beginning of the Tau's 3rd turn

Crimson Fists 3
My Assault squad arrives near the out of position scout squad and the Venerable Dread comes on near my tactical marines to shoot at the Piranha. The Assault marines head towards the stranded scouts and the normal Dread, with no shooting to do, runs at the Fireknives (this was really stupid - I essentially ran a free kill point straight at Spoony's guns). 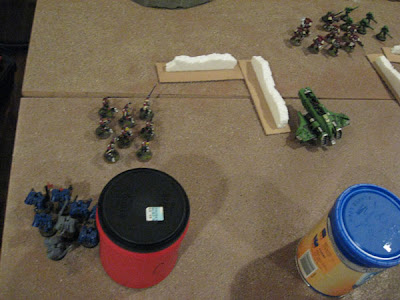 The Piranha makes its cover saves against my Venerable Dread's shooting while my plasma squad kills two drones and a Fireknife. Despite my best efforts to lose, things are looking up a little.
Simon 1, Spoony 3

Tau 4
The last Fire Warrior squad walks onto the board while the Shas'O deep strikes in near the Fireknives. He immediately kills the free kill point (Dread) I ran out last turn, but loses one of his drones in the explosion. The Piranha misses the Venerable Dread and the scouts assault my Assault squad. They kill two of my marines and lose one of their own but the marines hold. The Fireknives shake the Venerable Dread.
Simon 1, Spoony 4 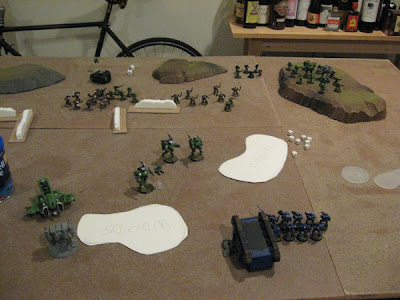 Crimson Fists 4
The melta Tactical squad arrives with my Captain and they both deploy near the Crisis Suits. The plasma squad kills one of the Fireknives and wounds the last one while my melta squad blows up the Piranha. My Captain (he needs a name) wounds the 'O in combat and runs him down. The Assault squad does the same thing to the scouts over near the coffee cans.
Simon 4, Spoony 4 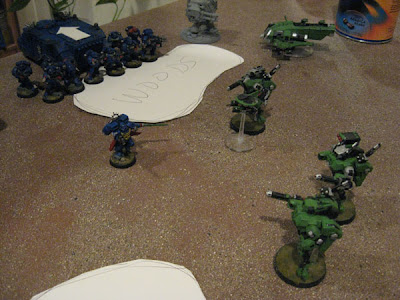 my Captain being menacing

Tau 5
The remaining scout squad continues to run away from my shooting and the Tactical squad shakes my Venerable Dread again. The Deathrains blow up my Rhino, which kills two marines in the melta squad. I really need to stop leaving free Rhinos around.
Simon 4, Spoony 5

Crimson Fists 5
I don't think I can win. I have very few long range guns to hit the tactical squad, scout squad, or any of the Firewarriors, and if I run my assault squad at any of them they'll get shot to pieces and Spoony will get another kill point. However, I can make this a draw if I kill that last Fireknife and then protect my vulnerable units. My melta squad kills the Fireknife and my assault squad, Venerable Dread, and Captain all make for hiding places. I also make a long-shot attempt at a kill point by lobbing a plasma cannon shot at a 6 man Fire Warrior squad, killing one.
Simon 5, Spoony 5 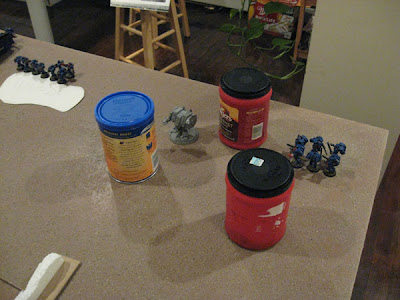 will the coffee cans protect me?

Tau 6
The Deathrains only manage to shake my Venerable Dread and I thought I was in the clear, but Spoony got lucky again. A six man Fire Warrior squad managed to kill three melta marines at long range and the tactical squad killed another with a krak missile, forcing a morale test. With a 73% chance of success I manage to fail and the melta squad runs right off the board edge they've been hugging all game.
Simon 5, Spoony 6

Crimson Fists 6
With almost no hope left, I lob another plasma cannon shot into the mass of bodies on Spoony's side. I deviate and kill a scout but don't find another kill point anywhere. 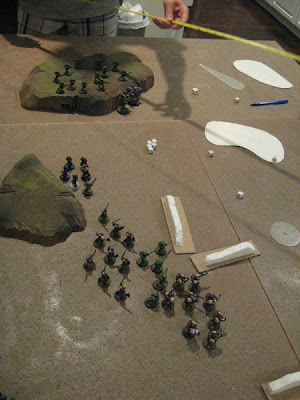 The game ends and I lose 5-6. I'm currently 0-4-2 with my Crimson Fists. Despite my grumblings though, these six games have all been a lot of fun and I'm happy to have the opportunity to play at all.

What did I learn?
Does anyone know any good, strong, Spanish names for my Captain? I'll be hitting up Google but I'm open to suggestions.
battle reports crimson fists warhammer 40k