Posted by Simon on August 12, 2009
My previous attempts at freehand are limited to drawing squiggles on purity seals and painting some 5's on my Assault marines. Since the whole point of red marine is to push myself to get better and try new things I though I'd attempt something a little more complicated. The Sons of Orar are an Ultramarine successor and their chapter symbol is essentially the same.

For something else I probably would have spent some time looking at source material but since I know what the Ultramarine symbol looks like I skipped this part.

Next I spent some time getting familiar with the structure of the shape. I wanted to figure out, at least in my head, how the shaped was formed and see what looked good. This is a photo of a few sketches I did where I played with different ways of drawing the shape and different structures (thick or thin lines, tall or short arcs, etc). 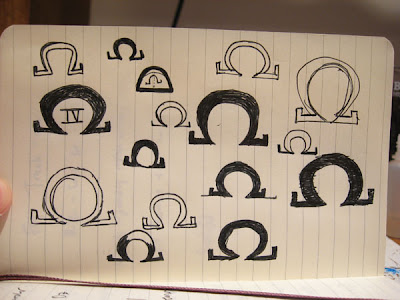 Drawing something is one thing but painting it, especially on such a small scale, is something else. I found a few spare bases and spent a few minutes practicing painting the shape. These are a little more consistent in their shape (at least, I tried to make them that way) and based off of my previous experiments. 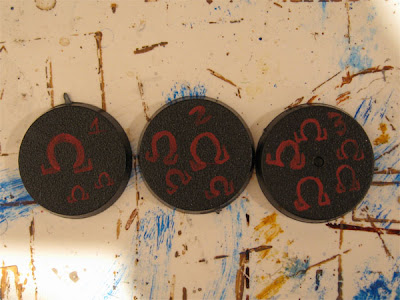 I was ready to go at this point but when I picked up red marine I reconsidered. Curved shoulder pads aren't the same as flat bases and I was only going to have one chance to get it right so I found some old marines (Ultramarines, oddly enough) and painted a few shoulder pads. 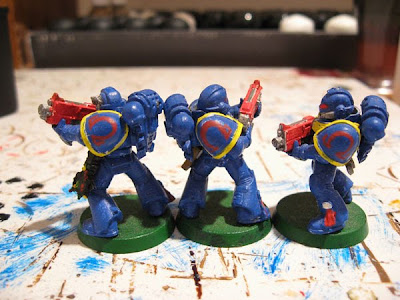 At this point I couldn't justify not doing giving it a go, and you can see the results below. 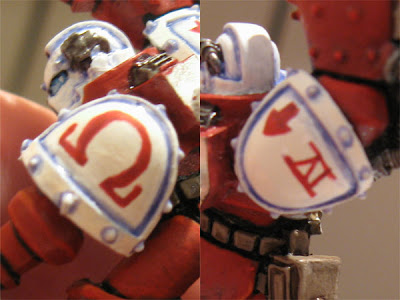 Not bad for a first attempt - I am pretty pleased. After I painted the chapter symbol the other shoulder pad looked pretty bland so I put the tactical symbol and a squad number on it.

I'll be done with this guy soon and then I'll be doing the fifth and final Greatsword. He has a huge banner that I'm going to try something larger and more complex so look for another tutorial on that.
painting tutorials warhammer 40k