Posted by Simon on November 10, 2009
Even though I have a decent sized Khador army painted for Warmachine I don't actually know how to play. Spoony and I played one game a few years ago but neither of us really had any grasp on the rules and we were using appropriately sized 40k models as proxies.

I've been in touch with one of the Privateer Press Gangers and this weekend he's going to play a few games with me. It's been a while since I've read through the rules so I'll be doing that this week in addition to getting my models ready (gloss and matte varnish here we come!). What I'm most worried about though is knowing how and when to use my model's abilities, especially the warcaster. I'm going to do a little thinking out loud in this post while I try to figure out how to run Sorscha in Mk1. 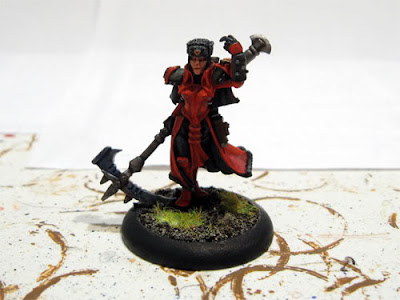 Feat:
Sorscha's feat makes all enemy models within her control area and in her LOS stationary for a turn. Stationary models drop to DEF 5 and can't activate on their turn. They are also automatically hit in melee. The obvious application here is to make a lot of enemy models stationary and then beat them up in melee. However, I think I could use this in a defensive manner as well, sort of like a reset button if things start to get out of control near my caster.

Weapons:
Sorscha's RAT of 5 isn't great, but there isn't any reason not to take a shot with her Hand Cannon if I'm not in melee. If I have two extra focus it looks like boosting to hit and boosting the damage will be more effective than casting Razor Wind.

Spells:
Boundless Charge lets a model charge at SPD +5 (instead of +3) and ignore rough terrain and obstacles. It can be cast on an enemy model. This is sometihng that could be cast early on to get my slower 'jacks moving quickly and then later to get them get the charge into combat. I'm sure there are ways to use it to get enemy models out of position but I'll probably need to play a bit more to find situations where that applies.

Fog of War puts an AOE over Sorscha's control area that grants concealment (+2 DEF to ranged and magical attacks). This seems like a great first turn spell to protect her and her 'jacks from ranged attacks while they walk up the board. It can be upkept to keep the protection going.

Freezing Grip lets Sorscha make a unit or model stationary for a turn. Just like her feat, this is a spell that will allow me to control the board and set up attacks or prevent someone from attacking me. At 4 focus it is expensive to cast.

Razor Wind is a RNG 10, POW 12 magical attack. If I really needed to shoot something I'd probably take the 2 focus and use them to boost my hand cannon instead of using this, unless I needed a magical attack.

Tempest is a 4" AOE with POW 12 that knocks down models. Knockdown is slightly less powerful than making something stationary (the models can stand up next turn by forefitting their movement or action) and it's limited to a 4" AOE, but now I'm also getting to damage the models. Also pricey at 4 focus.

Wind Rush is a once per turn spell that gives Sorscha an extra 6" of movement (that doesn't make her count as moving) and +4 DEF for 2 focus. This spell will be useful to get into melee, get out of trouble, or just general use for the DEF bonus.

Conclusions:
Sorscha has a pretty diverse set of spells. Tempest and Freezing Grip allow me to control my opponents models and make them easier to hit. Razor Wind and Tempest are attack spells that let me damage the enemy. Wind Rish, Boundless Charge, and Fog of War provide buffs to my models to make them have better DEF, be harder to hit, and move faster.

However, having only 6 focus means that spell choice is going to be important. The two control spells each cost 4 focus, Boundless Charge and Fog of War are 3 each (although FoW will only be 1 focus after that for upkeep), and Wind Rush and Razor Wind are each 2. In my opinion, Razor Wind isn't terribly useful so most of my spells are 3 or 4 focus to cast. That's going to mean that I'll be able to cast one spell and give out focus to my 'jacks, or cast two spells and have almost no focus left over.

Again, these are more stream of conscious thoughts about Sorscha than a tactica on how to use her effectively. I've never played the game and I'm just hoping to have some idea of what to do in my games this weekend.
khador warmachine