Posted by Simon on January 15, 2010
I know I'm supposed to be working on my Sternguard but I haven't been able to touch a paintbrush since Tuesday. While I try to find time to paint I thought I'd talk about one of the new Khador models coming out soon, the Greylord Escort Unit Attachment for Doom Reavers. 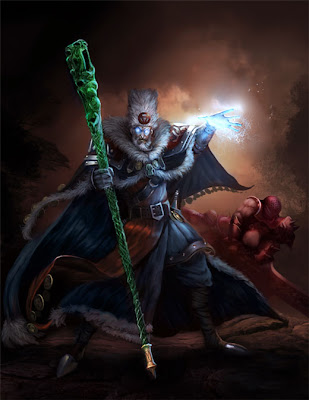 "Only the most courageous of Greylords are chosen to accompany the barbarous Doom Reavers into battle. These escorts are invariably experts in the field of Orgoth studies as well as formidable arcanists. Moving amidst the Doom Reavers like a handler of vicious beasts, the Greylord carries a staff of Orgoth origin. His will is exerted through this dark artifact, restraining the Doomreavers from murdering one another when they rip into the enemy. He channels that rage to provide a necromantic imperviousness to the effects of injuries. Gaping wounds close of their own accord as the Orgoth weapons chatter obscenely amongst themselves."

Speculation on the PP forums based on the above text has a lot of people thinking this guy will give the Doom Reavers Silence (so they don't kill each other) and Tough (making them last longer). Since he's a Greylord he'll probably also have some spells to cast, although the text doesn't give much indication as to what they might be.

Assuming these speculations are correct, what does this mean? Being able to give the Doom Reavers Silence without taking an expensive Fenris model would be pretty great. Fenris is a powerful model but he's a 5 point investment, compared to the 2 or 3 points this UA will be.

I'm a little more mixed on Tough. A model that passes its Tough check survives but is knocked down, which means next turn it has to stand up and waste its movement or action. Doom Reavers aren't very durable and can't afford to be slowed down waiting for their friends to get up.

Spells would be interesting as well, except that a model can't cast spells and run in the same turn. Doom Reavers are always running until they can charge, so unless there is some special rule allowing this Greylord to run and cast spells he probably won't be using much magic.

Again though, this is all speculative until PP releases the cards or we get a preview. Here's the model: 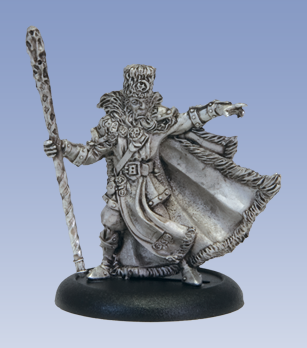 The staff is pretty cool looking, and I'm glad they toned down the size of the cape after the Koldun Lord. The pose is pretty bland and the face looks a little weird, but maybe it will look better with paint.

Of all the Khador models previewed thus far I think that this guy is probably the one I'm probably most excited about, and is making my decision over what my next infantry unit will be easier.
khador warmachine