Posted by Simon on January 31, 2010
Painting for Points
I had a strong finish to last year and was able to carry that momentum into 2010. This month I finally finished the last three Sternguard I had on my table and they're now happily on the shelf with their two squad-mates. I also painted up The Butcher over a few days last week when I was home sick. That's a start of 4 points for 2010.

New Model Fund
I wasn't very good at sticking to my budget this month. Warmachine MkII officially came out this month and there was a lot of stuff released. I bought the new rulebook, the Khador faction deck, and No Quarter 28 as part of the release. I also bought some black spray primer and the Great Bears for my Butcher list. In all I spent $104.71 which puts me at -$51.92. Adding in the $50 for February, I'm sitting at -$1.92.

Unfortunately, I know for sure I'll at least be buying the Cygnar army book when it comes out next week and possibly some Cygnar models for an army I'm thinking about.

Finally, since I don't like updating without a photo, here's a WIP shot of what I'm working on right now: 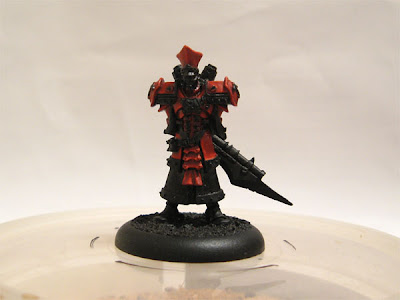 An hour or so to finish the red tonight and I think he's off to a good start.
new model fund painting for points