Posted by Simon on May 28, 2010
I'm playing in a 30 Soul Stone Malifaux tournament this weekend with my Outcast army. My hobby time has been really shortened lately due to my night classes but over the past few nights I've found the time to get my army (mostly) assembled and ready.

The list I'll be taking is the Viktorias, 3 Ronin, a Convict Gunslinger, and Misaki. This leaves 4 Soul Stones for the Viktorias to use and gives me an army that moves fast, hits hard in melee, and can shoot reasonably well. Here's the gang in their mostly unpainted state: 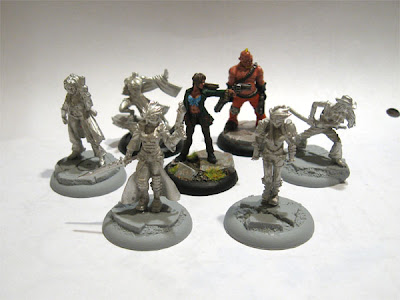 I'm a little nervous about the tournament because I've only played two games before. I hope to be able to get a quick re-read of the rules tonight and a chance to review my models' special abilities, but mostly I think I'll just be moving little men around and hopefully having a good time.
malifaux outcasts