Posted by Simon on June 11, 2010
This was posted in a blog post on the Privateer website earlier this week. 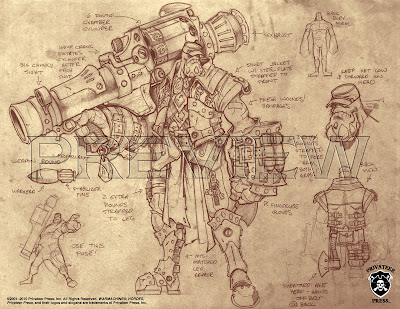 click for a bigger version - image from Privateer Press

There were zero spoilers about any of his rules, but how sweet is this model?! He has a gun that is so ridiculously large that it almost looks normal, he has spare rockets strapped everywhere, and an awesome Civil War style hat. I have no idea what he's going to do but unless the totally bomb the model I'll be picking this guy up when he releases.

I just hope they don't use the pose in the lower left corner, the main image has so much more character.
hordes trolls