Posted by Simon on June 25, 2010
Privateer Press recently announced that it would be re-releasing the started boxes for the original four Warmachine factions (Khador, Cygnar, Menoth, and Cryx) in plastic. When I read this I thought there would be the new plastic heavies that all of the factions got when Prime MkII was released, plus the new light 'jacks that appeared in the faction books, plus the new sculpts of the original Prime 'casters. 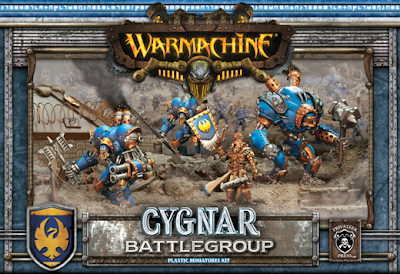 Cycgnar Battlebox - image from Privateer Press
I was mostly right, but apparently the new 'caster sculpts are plastic as well! Privateer Press has been making some very nice plastic models recently (the Menoth Bastions and and Troll Fennblades come to mind) but I'm really excited to see what they can do with some of the high profile models in plastic.

It also means that I'll probably be picking up the Cygnar box so I can make a little army for the Kraye model I have on my shelf. Fortunately there isn't a release date announced yet so I'll have some time to get my New Model Fund back under control.
warmachine