Posted by Simon on June 21, 2010
After three straight weekends of tournaments I took last weekend off to sleep in and do other things, but this weekend I was back at my FLGS for a game.

My opponent played a Circle army led by Kromac that had the new Warpwolf Stalker (proxied by the Pureblood in the photo below). I was running a pretty normal Strakhov list. 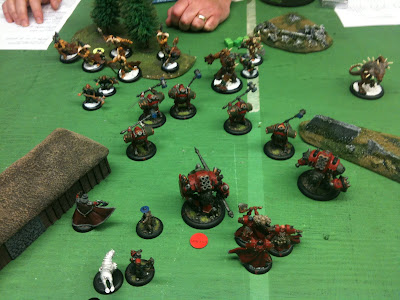 I saw an opportunity to pull off my first Overrunn + Superiority-ed Spriggan assassination run and I was so excited I went for it even though it wasn't terribly high percentage. Strakhov charged a Druid in a vortex and with the debuff needed a 9 to hit. I boosted my roll and could only come up with a 5, so the whole thing fell apart.

Strakhov barely survived the Circle player's next turn and the game turned into a big attrition match. I snuck in a win because Kromac had been cutting himself for Fury a lot so Strakhov was able to charge and kill him.
battle reports khador warmachine