Posted by Simon on October 29, 2010
Tomorrow I'm heading down to my LGS for a Halloween tournament. The format is a little strange but seems like it will be a good time. One 50 point list with two 'casters and only 'jacks. Huh?

It was a pretty easy choice for me to go with the Khador to this tournament, mostly because I'd have to bring a ton of light 'beasts if I went with Trolls and I can't think of any way they'd be able to contribute. They could take out other lights, but my Khador heavies can do everything!

Once I picked out my faction I had to think about which 'casters to bring. pButcher was a no brainer - Full Throttle is a great way to get a lot of use out of a little bit of Focus and his feat means that my army of 'jacks will be even scarier.

pIrusk and Zerkova just don't do much for 'jacks, so I was left looking at pSorcha and Strakhov as my second. Initially I wanted to bring Strakhov for the alpha strike potential of his feat and Superiority, but he's a bit of a one trick pony and didn't offer a whole lot of 'jack support outside of his feat.

I picked pSorcha because her feat means all of my 'jacks can auto-hit in melee (so I can spend focus on extra attacks) and I had a nasty idea to give her two Destroyers so that I could drop POW 14 bombards all over the map. 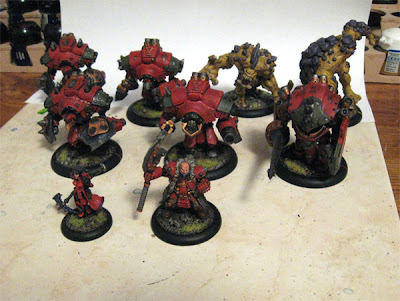 my two Troll heavies pretending to be 'jacks
Here's my list:

My plan is pretty simple. Butcher and his 5 friends will advance up the middle and play attrition games against the other 'jacks. A combination of his feat, Full Throttle, and any of Sorcha's knock down vectors should mean I can knock out a few pieces of the other army quickly.

Sorcha is my 'caster killer. If I can sneak two boosted bombards onto an enemy 'caster I can deal a big blow to the other army, and I'm confident I can keep her safe. With Wind Rush and Iron Flesh she'll be running around comfortably at DEF 21 and against a bunch of MAT 6 ish 'jacks I like her chances.

I had to borrow a second Destroyer and Devastator from the local Press Ganger (I only own 5 'jacks!) - the two Troll heavies in the photo are my stand-ins until I can pick up the models.
khador warmachine