Thoughts on the Dire Troll Bomber 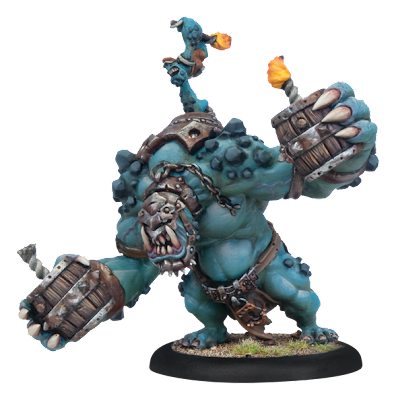 image from Privateer Press
That alone would probably be enough to convince me to field this guy, but his rules are awesome too!

His Powder Bombs are POW 16, AOE 4. My Kodiaks have POW 16 fists, but they aren't AOE 4 and don't have and 8" range (12" with Snipe, and up to 17" if I walk him forward)! These things will put big holes in 'jacks and even bigger holes in infantry units. He's also no slouch in melee either, packing a pair of POW 15 claws.

His MAT and RAT aren't anything to write home about but they'll get the job done with a boost. He has 4 Fury to throw around so I can boost the hit rolls on high DEF infantry, or the damage rolls on high ARM 'jacks to make sure he gets the job done.

I'm not blown away by his animus, which gives a friendly unit immunity to blast damage. The only use I can think of is to put it on one of my low DEF models, run that model near something with high DEF, and then start throwing bombs at it.
hordes trolls