Posted by Simon on November 18, 2010
This past weekend I played a game with our local Press Ganger using his new Gator army with Bloody Barnabas. The table was terrain heavy with a big swamp in the middle (we figured, why not go all out for the first game) and I got demolished.

In the photo you can see two circles (one labeled smoke, the other is light blue) that were swamps Barnabas gets to place at the beginning of the game. The two giant templates near the top of the photo are Swamp Pits - a 2 fury spell Barnabas can cast. All of that, combined with the heavy terrain, was a huge problem for my list. I had zero models with Pathfinder in the army and Barnabas was able to get me stuck in difficult terrain for the entire game. 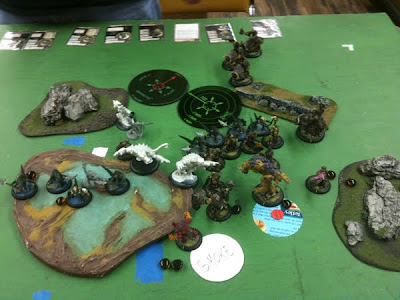 so many swamps
I sent most of my army up the middle of the board and the Long Riders along my right flank. The Gators were spread pretty evenly across the board, so I used Hoof It and the Long Riders' SPD 7 to shift everything to my right side, hoping to isolate half of his army. I think it was a good plan, and I know my opponent was nervous about it, but between his models being Amphibious (stupid me agreeing to put a big swamp in the middle of the board) and Barnabas throwing Swamp Pits and his feat around, it didn't matter.

He had some Iron Fleshed gators tarpit my tarpit, Swamp Pits and a Wrasler slow down and eat my Long Riders, and just generally ground my army into the ground.

Even though I lost, the game was one of the more fun ones I've played recently. I knew I was losing the middle (and most of my army) but I thought I could pull of a sneaky assassination with the Long Riders running around back of his army. It might have worked but the middle collapsed a little too early and Barnabas was able to move some of his army to stop my plan.
battle reports hordes trolls