Posted by Simon on November 03, 2010
Only four players showed up to the tournament this weekend (including the Press Ganger and one late player) so we scrapped it and just played some games under the strange format.

I played a game against a Cygnar player running this list: 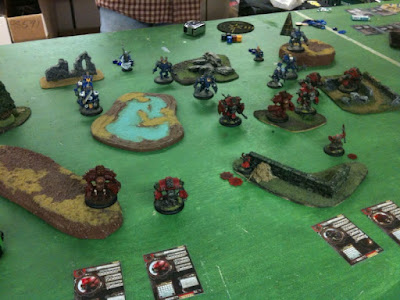 end of turn 2, not much happening yet

As expected, this was a weird game. He was able to really stall my advance for two turns, first with Haley's feat and then Stryker's feat. During those two turns Thorn and the Lancer were able to remove the cortex from both of my Juggernauts, the Defenders were able to nearly put down one of my Kodiaks, Rowdy took out the other Kodiak, and some good Telekinesis and Earthquake play caused my Spriggan to be knocked down in the lake. Not good.

After that it was just some mopping up and Sorcha went down. Her and the Destroyers attached to her were pretty useless the whole game, doing almost no damage even with boosted shots.

Even though I lost this was a very fun format. I'm looking forward to the Breast Cancer Brawl this weekend to see if I can do a better job with the Trolls.
battle reports khador warmachine