Pyg Burrowers and Their Uses

Posted by Simon on November 16, 2010
Normally infantry units make my soul sad, but these little guys painted up in no time and I had a lot of fun with them. I even did the whole unit in one go instead of breaking them up 5 and 5. The yellow doesn't have as much depth as I'd like but I'm worried that another wash will be too dark. I may just leave them as is and move on to other models - these guys just tipped the Trolls over into 50% painted. 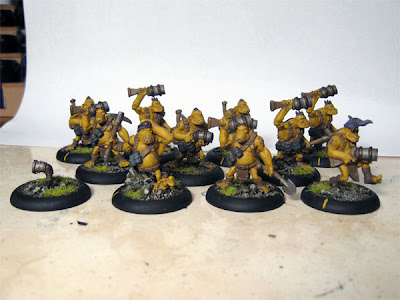 The internet is all up in arms about these guys. A lot of people think they're incredibly powerful and undercosted - there are a number of very long threads on the PP boards about them and how best to use them.

Here's the gist of what they can do:

They deploy 16" forward with Advance Deploy. Turn 1 they burrow and move 5" forward. Turn 2 they pop up (after being totally immune to any attacks) and are sitting at 26" forward, over half way across the board. They can charge 9", meaning they have a threat range of 35". Your enemy deployment zone is 38" away from your board edge, so these guys can realistically attack anything that moved more than 3" out of the enemy deployment zone on turn 2.

Not only that, but with a Fell Caller on hand to give them a MAT buff, each Burrower can attack with a boosted POW 8 and an unboosted POW 14 at MAT 6. Assuming average rolls those turn into POW 18 and POW 21 respectively. That's a ton of high POW attacks at a reasonable MAT that can't be attacked before they get the charge off. Oh, and they're only 6 points.

I tend to take the internet with a grain of salt (although I didn't see any ridiculous claims being made) but this past weekend at the tournament a player I have a lot of respect for gave them a try and came away very impressed. Once they're painted I'll take them for a spin and see if I can't make the little unit of doom work for me.
hordes painting trolls