Posted by Simon on December 02, 2010
I have a few games with Grissel under my belt so I'm going to try a new warlock, Grim Angus. He's the first ranged focused warlock or 'caster I've used. Here's a little rundown on him.

Grim is speedy for a Troll at SPD 6, has a good RAT of 7, and is tough to hit with DEF 16. His STR and MAT are decent but I'm hoping they won't see much use, and he has pretty typical Troll armour at 15. He is a Fury 6 warlock. 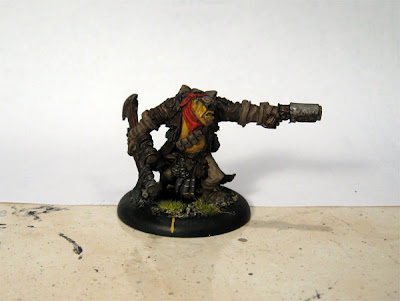 Pathfinder and True Sight mean Grim's movement and shooting aren't affected a whole lot by terrain. Grim is Tough because he's a Troll. He also has Take Down on his melee weapon but again, I'm hoping to not have that come up.

Headhunter is a RNG 13, POW 13 gun that is Magical and can give beasts a speed boost if they charge a model damaged by it. 13" is longer than Grim's control range, so there shouldn't be too many questions about what he can be shooting at. With Farstrike pumping that up to 17" there isn't much on the table Grim won't be able to reach.

Grim also has an 8" Snare Gun (12" with Farstrike) that knocks down whatever it hits. He can't shoot with his other gun after that, but Knock Down is pretty powerful.

Headhunter has a blade on the back end that is POW 12 with Take Down so Grim isn't a melee slouch by any means, but I'd rather he was shooting stuff. 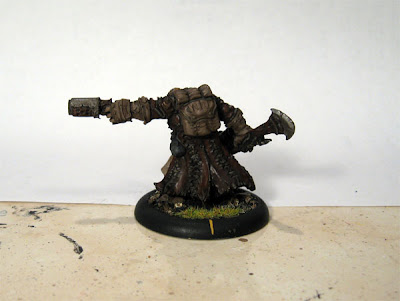 Spread The Net is a very good feat. It gives all enemy models in Grim's control area -3 DEF and any models beginning their activations in his control area have -3 SPD. Models with the SPD debuff won't be able to charge but the DEF debuff means that they're probably going to be dead before it matters.

I can see this feat being great for a lot of things, but I see it shining in scenario play with control zones. On my turn the feat will allow me to kill anything in the control zone and get one point. On my opponent's turn the -3 SPD will mean they can't get any new models in to contest and I'll get a second point.

Cross Country - An upkeep spell that gives a model / unit Pathfinder and Hunter, essentially allowing it to ignore terrain for moving and attacking.

Lock the Target - A 10" spell that prevents the target from running, charging, or being placed if it takes damage. The POW is only 10 so this spell is going to be hard to pull off on heavy 'jacks or beasts. This is a tough sell for 2 Fury but I'm sure there are good uses.

Marked for Death - Another upkeep spell that gives the target model / unit -2 DEF and removes Incorporeal and Stealth. Combined with Grim's feat this will bring a model / unit to a total of -5 DEF

Return Fire - For 1 Fury, if a target friendly model is shot at, it can shoot (or hit) back. Probably pretty cool on a Bomber or Grim, either as a good way to get an extra attack or as a deterrent for my opponent to shoot. 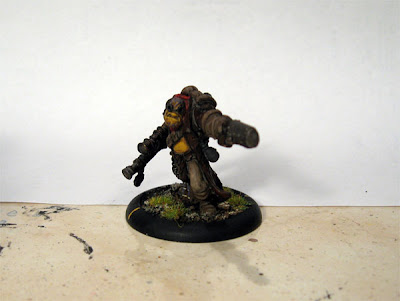 I'm going to try using some Pyg Burrowers and Bushwhackers with Grim, as well as the Blitzer I just painted. I'd also really like to try a Bomber and some Scouts, but I'm going to need to wait until at least January before I buy them.
hordes painting trolls