Posted by Simon on December 27, 2010
Templecon is about one month away and I've started my preparations. I am registered for both Midnight Madness tournaments and I'm going to talk about the second tournament in this post - Death Race.

Death Race is a single list, 25 point, 4 round tournament using only the Killbox scenario. I'm not positive on the specific format but it seems pretty clear that the goal is to kill your opponent's caster as quickly as possible. Here's the list I've come up with: 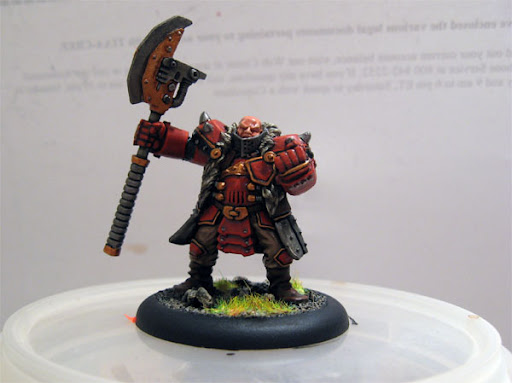 I tired to keep the model count low so there wouldn't be too much stuff to activate on my turn.

What I'm primarily looking to do is run the Kayazy forward for two turns while they have Iron Flesh on them. They should meet up with my opponent's stuff on turn two. On turn 3 I'll drop Iron Flesh, pop Butcher's feat and the Kayazy mini-feat, and kill the enemy 'caster. Because of the requirement that 'casters be 12" from all table edges I shouldn't have any trouble cornering the enemy.

8" deployment, 12" first turn run, 10" second run, 9" charge = 39" over 3 turns. The enemy 'caster can be a max of 36" away from my back edge by then so I like my odds. If they Kayazy can't reach the 'caster on turn 3 they'll just attack whatever is in their way with the Kodiaks and snipers - under Butcher's feat and Full Throttle there isn't much that will stand up to all of that.

I brought the two snipers to help clear out charge lanes over for the Kayazy - they both have Snipe, Kell has a magical gun, and the Marksman has a POW 12 gun so they can handle a variety of threats. Kodiaks are great little 'jacks. They run for free and have Pathfinder so they're focus light and efficient. They also have a great *attack for clearing infantry and their chain attack really shines under Full Throttle. They'll be dealing with 'jacks for me, either by destroying them outright or throwing them around.

If they Kayazy fail as my primary assassins my plan is to follow up with the two Kodiaks to clean out infantry and 'jacks and then have the Butcher kill the 'caster himself.
IABN khador templecon 2011 warmachine