Posted by Simon on December 14, 2010
This past weekend I took a trip to a different LGS to play in a 25 point tournament. I brought along the Grim list I took out last weekend.

My first game was against a new Circle player running Baldur, a Druid Wilder, and a bunch of beasts. He ran them forward in waves and I was able to pick them off pretty easily with my ranged stuff. I didn't kill Baldur but eventually won on tie breaker because most of my army was alive and most of his wasn't. 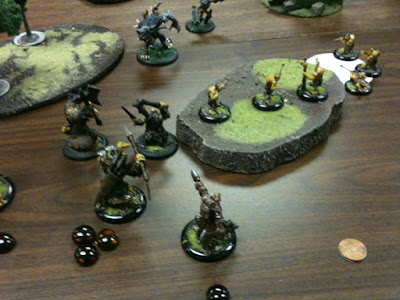 The second game was against a tier 3 Kraye list that was more maneuverable and shootier than my list. Since those were my list's strong points I was in some trouble. Due to some early bad rolling on my opponent's part I was able to keep him off his control point early but eventually he wore me down and took the scenario win.

My last game was against a Gorten list. My list was built to counter this list but I played very passively and poorly while my opponent played well. The game ended in a tie (I kept him off his flag but wasn't aggressive enough in taking my own) but he would have won had we not run out of time.

All in all I don't think I played well during this tournament. I was too passive - I didn't scoring a single control point and didn't making a single charge over three games. I also think the list is lacking in high POW attacks, instead relying on volume of medium POW attacks. If I were to build this list again I would probably swap out the Bushwhackers for some Burrowers.

This weekend is an escalation tournament. I'm thinking about bringing eMadrak but haven't thought much about the lists I'd bring.
battle reports hordes trolls