Posted by Simon on January 21, 2011
The other day there was a fantastic article on Bell of Lost Souls written by GentleBen called 'Stuff I Painted in 2010.' He had photos of the massive amount of things he painted over the course of the year and it was very inspiring. So inspiring, in fact, that I decided to see what my collection of painted models in 2010 looked like.

Khador
I started the year still working on my first Warmachine army, Khador. I added a few new 'casters and infantry units to the army, which was lacking in both categories. I also added a few 'jacks and solos to round things out. 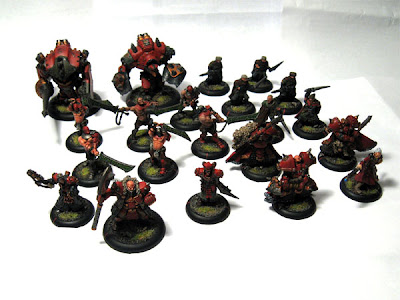 Trolls
The second half of the year was taken over by my yellow Trolls. Armed with a quick and effective painting method I was able to really crank out these models and got an impressive amount done in the last 7 months of the year. 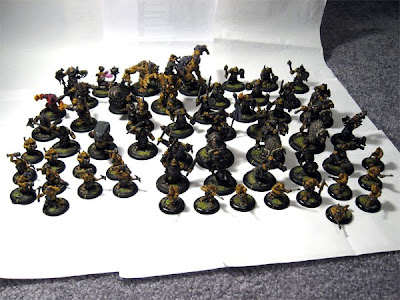 Other Stuff
Right at the beginning of the year I finished some Crimson Fist Sternguard, finally putting that army (and GW games) to bed. I picked up a small Malifaux crew and painted a few models there, and painted a unit of Cygnar Gun Mages for Spoony. I also just recently painted up an Orc Shaman for a Christmas mini exchange.

All told I managed to paint 90 models in 2010, an average of about one model every 4 days.
hordes khador painting trolls warmachine