Posted by Simon on September 29, 2011
This 'jack has been half finished on my painting table for a while now.  For some reason I just wasn't enjoying putting paint on him and progress was painfully slow.  Even once I got rolling on him this week and he was almost done I was still looking past him to other projects. 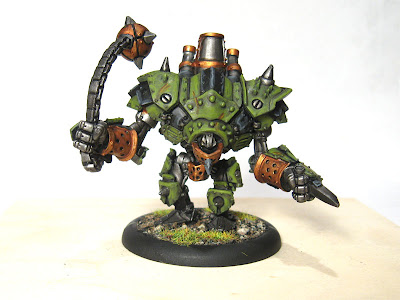 The model was originally all green but when I had finished I didn't like how he looked.  I went back in with some blacks and grays to break up the green and I'm much happier with how it looks now. 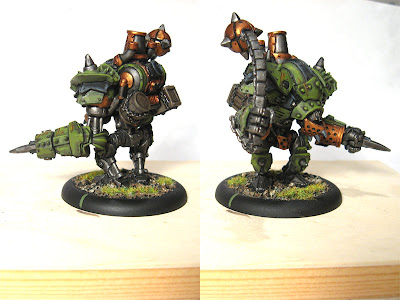 I haven't given too much thought to how this guy will run in a Magnus list.  Clearly he's an infantry death machine with Reach, Thresher, and Chain Weapon on his right arm.  POW 17 is reasonable against heavies too, although it could be better.  He'll probably get Iron Aggression for boosted attack rolls while a Nomad picks up Temper Metal and tanks damage.
mercenaries painting warmachine