Posted by Simon on March 14, 2012
We've started a slow-grow league at my LGS and I'm going to be taking Zerkova as my 'caster.  She's my favorite character in the IK setting and I haven't had the time to learn how to play here - this seems like a great opportunity.

I'm going to be building my lists around the 7 point core of Zerkova, Wishnailer, Reinholdt, and Black Ivan. After some conversations at Templecon and a pick-up game I realized how strong Zerkova could be with Wishnailer and Reinholdt's extra dice on her spells.  Even a POW 12 Razor Wind hits super hard when you're rolling 5 dice for damage and dropping the two lowest.  Black Ivan is a very versatile 'jack who can make good use of Watcher, will easily get two focus a turn for Bombard shots, and has a damn cool model.  He'll probably be the only 'jack I take until 50 points.

Game 1 - Mortenebra, some 'jacks, and some Scrap Thralls

This game was a lesson in what the Scavenger can do.  Zerkova was eaten on turn 2 after some Mortenebra feat + Overrun + Scavenger shenanigans that I totally underestimated.  I didn't have Watcher up because I had used a bunch of spells to kill Scrap Thralls and I hadn't feated on my second turn because I thought I was safe and wanted to save it for turn 3. 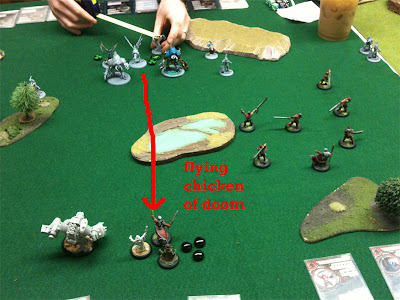 Game 2 - Reznik, Scourge of Heresy, Cleansers, and a Sunburst

I went first and we both ran everything forward.  On my second turn I forced fear checks on the Cleansers and Sunburst crew with my Doom Reavers - both failed.  This was pretty bad for Reznik at the 15 point level.  The Doom Reavers were able to tie up Scourge of Heresy, the Cleansers never rallied, and I was able to take Reznik down with some good spells and bombards. 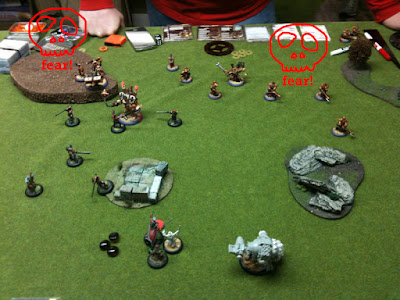 I had some great luck with dice this game.

I didn't really know how to approach this game but decided to ignore the beasts if I could and focus on Baldur.  I knew he'd have the lowest armor of the three (but still 20+) and I hoped that I could zone out the two heavies.

My army really suffered for not having Pathfinder in this game and I got tripped up on a piece of terrain and all the rough terrain from Megalith.  I was able to get a boosted bombard, a Razor Wind, two Doom Reavers, and the UA onto Baldur but some terrible dice rolls meant that I couldn't seal the deal. 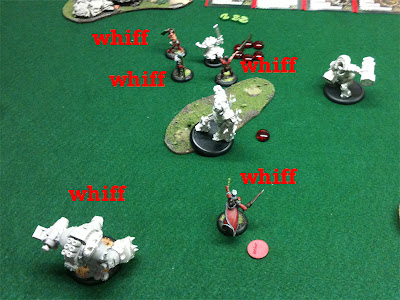 Reinholdt and Wishnailer MUST activate before Zerkova for her to benefit from their dice tricks.  I forgot to do this a few times, most notably in the Baldur game.

Doom Reavers are not durable at all.  In all three games I'd get ready to make an epic charge but would only have two Doom Reavers left.  They're hard to protect at 15 points and I don't have much of a back-up plan.

Pathfinder is important.  I missed having Saxon in the list, especially in the last game against Baldur.

I'm considering dropping the Doom Reavers and adding the Great Bears and a unit of Eliminators (if they ever get them in at my LGS!).
battle reports khador warmachine