Outriders - Thoughts on the Spoilers

Posted by Simon on March 05, 2013
I've been in and out of the Warmachine scene for about a year but recently something seriously caught my eye - Greylord Outriders. 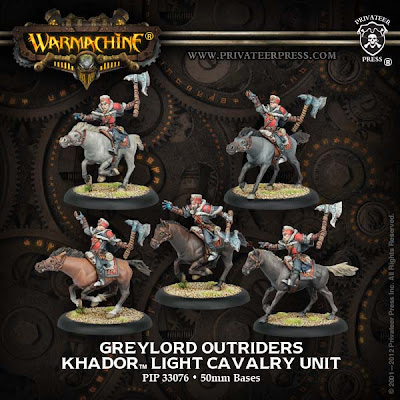 Greylords are up there on my list of favorite things about Khador and I was excited about the idea of some wizards on horses. A few weeks after the models were previewed some spoilers hit the 'tubes and I've just had some time to look them over. Here are a few thoughts (with the caveat that I'm a terrible player):

Notable Stats
SPD 9, Light Cavalry, Pathfinder - That's a ton of speed, some extra speed, and the ability to use it anywhere. Assuming they deploy 7" up the board and run turn 1, these guys can start their second turn 30" from your back table edge, or 6" past the mid point of the board.

DEF 13, ARM 15, 5 health boxes, Snow Wreathed - Nothing spectacular here on its own but all together it looks surprisingly durable. Snow Wreathed brings the DEF up to 15 against ranged, which means they're reasonably safe against shooting up to RAT 7, and ARM 15 + 5 health boxes means POW 10 guns will need multiple shots to kill each Greylord. Again, these aren't earth-shattering defensive stats but they're enough that your opponent will actually need to commit resources to killing them.

Magic Ability 6 - This is a bummer. The Greylord standard was 7 here and even the single point drop hurts a unit with a maximum of five guys.

Spells
Frostbite - Every Greylord has it but these guys seem tailor made to get good use of our 8" magical spray. They're fast enough to get into positions to maximize spray coverage and they might be evasive enough to survive to do it again.

Winter's Wind - I'm sure there are some cool applications for this but right now it looks like a corner-case suicide mission. It may just be the wording in the spoiler that is causing me to misunderstand what this ability does.

Warcasters
pSorcha, pVladimir, Harkevich, Zerkova - Magic Ability 6 is a problem for these guys but it is less of a problem if these 'casters are on the board. In order, stationary effects, Signs and Portents, Fortune, and Icy Grip are all very excellent ways of stacking the deck in favor of the Greylords.

pIrusk, Old Witch - Inhospitable Ground and Murder of Crows don't help the Greylords hit but they do make it so misses aren't so deadly on the counter-attack.
khador warmachine