Posted by Simon on April 12, 2009
I've been working the next unit for my Crimson Fists, a unit of 5 scouts with pistols and close combat weapons. These guys are designed to be a cheap third troops choice for me (to go along with my two tactical squads) that can be a harassment unit. They can infiltrate and be in the way early in the game, they can come on the board in surprising places, or can be used as a distraction / speed bump to protect something more important. 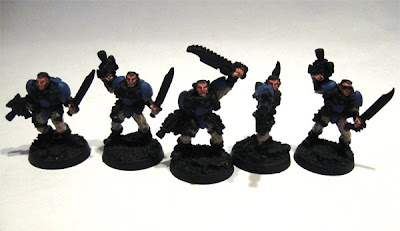 They're obviously still quite WIP but I'm pleased with where they are right now. These five are the original metal scouts (the tab between their feet says they were cast in 1999) which I like a lot more than the newer platic ones. I can remember thinking these were awesome models with I was browsing old GW publications as a kid in the 90's.

I've been trying to get these guys done quickly so I can start working on some other units to get as much of my 1500 point list completed as possible for May 9th. My goal was to have the whole list done for GD so I could play a fully painted list to play some games with but I'm not sure I can get it done. Here's my list:

I know it's not the most effective list but it should be fun to play. Eventually I plan to drop the Terminators for a Vindicator, a multi-melta Attack Bike, and a speeder with multi-melta and heavy flamer.

I still have to finish these Scouts, then paint 4 Assault Marines, 10 Sternguard, and a drop pod.
crimson fists games day painting warhammer 40k