Posted by Eric on August 19, 2009
I want to start out my first post by thanking Simon for offering me a spot to contribute on his blog. I think it is going to be a ton of fun contributing with him and I think it's going to be a great motivation for me to become more involved with the hobby.

I've been involved with this hobby in one way or another for about 8 years. My favorite part of the hobby has always been the numbers. I love analyzing squads and armies and figuring out the best way to play certain lists. My worst part of the hobby has the little patience that I have for painting a table top army. After 8 years I have lots of rulebooks, codex, minis (mostly in boxes), but only about 15 painted miniatures....

A couple of years back, I managed to tempt Simon back into the hobby. Much to my chagrin Simon really dove right in. Very quickly I was playing my unpainted plastic and metal models against fully painted and based armies that Simon fielded. I've found it a little ironic that I'd been a "veteran" of the hobby and Simon was finishing up painted armies left and right. Simon has been great by trying to encourage me to paint more while still putting up with my armies of white, grey, and black whenever we play. Simon's latest idea to motivate me in my painting was to include me in this blog. After a bit of hesitation, I decided to go for it and plunge right in.

I'd considered starting a blog of my own, but I'm much more excited to be sharing this blog with Simon. I think two people sharing their hobby experience on the same blog can add an interesting dynamic. Also, this blog will be much more interesting than any thing I would do on my own because it will be updated much more frequently than if I was writing one myself.

Now for the good stuff:

My current project is a Blood Angels army that I've only just started (which is about how far as all projects get). I'm starting out with 5 tactical marines to get the paint scheme down. I really like plasma cannons so I decided to include one in these first 5 marines. Eventually, it'll be part of a double plasma tac squad. 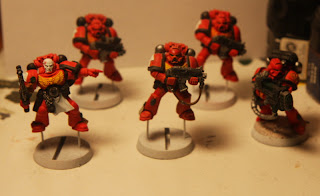 My reasons for picking Blood Angels. Back in the day (probably about 8 years ago) my Alaitoc Rangers and my Farsight Tau used to get destroyed by my friends Blood Angels. I used to hate them because they I didn't see how their game play involved any strategy or finesse. 5th edition rules and a new codex later I sat down and re-evaluated the army. The list is much more more interesting than it was years ago and I think the army can be very competitive if done right. Throw all the years of fluff that went into these guys and you have yourself very appealing army.

All this is good, but the main reason I decided to work on a Blood Angels army is all those red marines, with a splash of black, look absolutely killer. If your going to spend hours painting, might as well make something you think is going to look good....
blood angels