Simon vs. Spoony - Devastators, Sternguard, and Razorbacks (Part I)

Posted by Simon on August 31, 2009
Spoony and I like to talk about 40k a lot. We both have strong math backgrounds and like trying to find new ways to use codex entries. We've had conversations over beers in our living room, while driving through the deserts of the western , and now, over email. I thought it might be fun to share our conversations and open them up to everyone else to see what you all think. This is the most recent one we've had.

I (Simon) have been thinking about different ways to get long range fire support into my Crimson Fist army. I’ve toyed with the idea of a small Devastator squad backed up by a Razorback and after I saw Grey Death’s recon Sternguard squad I decided to sit down and see exactly what could be done with a squad like this.

This is going to be a two part discussion between Spoony and I. The first part will be us talking through Devastator vs. Sternguard and the second part will be a discussion about using the Razorback. My comments will be in blue and Spoony’s will be in red. 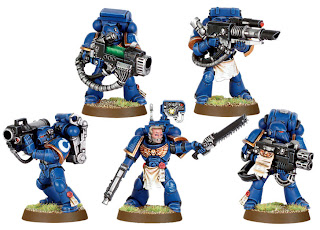 Since the point of these squads is to be long range I'm not very concerned about number of attacks and I think the effect of the special ammo is up in the air since none of it has a range of 36 inches. There is one 30" shot but I don't know if it's a deal breaker for me. I think I'd rather have 3 heavy bolters for the same price or be able to save a few points for essentially the same firepower. There is also the BS 5 heavy bolter that the signum offers. I give the advantage to the Devastators.

If you’re just concerned with reaching out and touching people with this squad then I think the Devastators are a better decision. At 30” and down though, the Sternguard are going to be able to effectively shoot at the same thing the heavy bolters are shooting at. Also if your opponent decides to get closer you have some other ammo options (ap3 weapons... :). Your opponent will think twice about trying to get close and assault a Sternguard unit to take away the fire power coming out of it. I think I would pick the Sternguard over the Devastators here since they are much more versatile for the same points cost.

The 5 Sternguard with 2 HB's can put up 6 HB shots and 3 long range bolter shots at 30", while the 5 Devastators can put up 9 HB shots. For the same amount of points, I think I'd rather have the 9 HB shots, especially since 3 of those are at BS 5. I see what you're saying about the Sternguard being more versatile at closer ranges, but if I can add a 4th HB for less than the cost of a 6th Sternguard I think I'd probably go that route.

So I forgot when shooting at long range you only get one shot. :P You’re totally right that the Devastator squad wins out hands down. 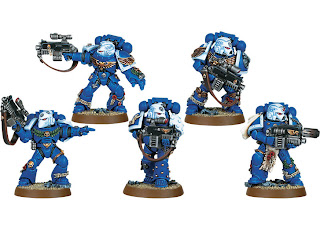 Not much difference here. On the one hand, 5 points for 3 marines with special ammo and the extra attacks is a price I'd probably be willing to pay. On the other hand, if points were tight I can see picking the Devastators. The signum means less here since BS doesn't apply to hit, it just modifies the scatter. You've got a 50% chance to hit anyway and if it scatters I don't think a 1" savings is a huge deal here. I’d call these squads even.

Again the Sternguard have a lot of other things going for them besides the plasma cannons (like extra ap 3 shots close up) so for an extra 5 points I think they win out.


You're probably right here - 5 points for 5 extra attacks in CC and 3 guys with the special issue ammo is a steal. Unless I needed the 5 points for something you’ve convinced me.


I want my expensive las cannon shots to count so I think the signum is a big deal here. Also, none of the special issue ammo is effective against the things you'll be shooting las cannons with. You can get a small savings going with Sternguard but I would say that paying an extra 5 points for a BS 5 las cannon is worth it. Advantage Devastators.


I think the Devastators win out here, but I still see benefits of the Sternguard. BS 5 for one las cannon is clutch and they have a high points disparity between las cannons and normal marines... Plus bolters/special ammo are both pretty useless when you are shooting at the things a las cannon would shoot at. Do they have a poisoned bolter shot for Sternguard, because they would be just as effective at shooting close high toughness dudes.

There is a poisoned botler shot for the Sternguard - it wounds on a 2+ I believe. That’s a good point but I think I’m still going to go for the signum being more useful than the poisoned ammo – I’d probably only shoot at high toughness stuff after the armour has been taken down.