Posted by Simon on September 01, 2009
This is part two of Spoony and my discussion about using small squads of marines in Razorbacks as long range fire support. Part one can be found here. In this post we finish off our discussion by talking about incorporating a Razorback into the squad. Again, my comments are in blue and Spoony's are in red.

I'm really interested in the idea of Razorbacks as baby Predators. They're cheap and since they only have the one weapon they don't really suffer from wasted guns like a Predator does. They also have the option to transport Marines, which brings me to my idea: mobile fire support squad mounted in a Razorback with like minded weapons.

This obviously won't work with a Tactical squad since they can't take heavy / assault weapons unless they're 10 strong and even then they can only take one heavy weapon. However, Sternguard can take two heavy weapons and Devastator squads can take up to four in a 5 man unit.

A Razorback with las canon and a 5 man squad with las cannons would be very effective at taking down tough targets.

The main use of this squad is long range, mobile fire support. The Razorback helps the squad redeploy if it runs out of targets and also provides protection, either during the transport or when boots are on the ground as movable cover. Even if the Razorback is destroyed the squad can then move into those ruins and defend them in cover.

One thing I want to mention is a razor back can hold 6 marines and in a squad where you have some expensive models (ie devastators) it is nice to have some lower expense models that can soak some wounds before your more expensive models bite it. Here is what I am talking about:

Having that sixth man in a squad means your opponent has to put more wounds on the squad before you are going to roll an armor save on a heavy weapon. However, your opponent would still need the same amount of wounds to cause a leadership test with a squad of 5 and a squad of 6 (2 successful wounds). I think this is also more important with a squad that has higher cost heavy weapons since the cost disparity between fodder marines and normal marines is so much greater.

I completely agree from a points perspective - I was keeping squads to a 5 man max because that's how big a combat squad is in the fluff.

Cool. I agree with following the fluff. Another thing to note is making the squad a 5 man squad gives you space for a character to attach and join in the transporting. 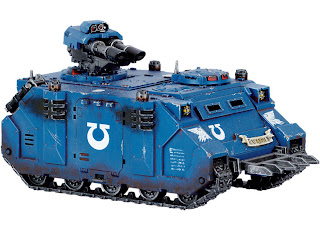 Just something to think about. Devastators (because they cost 15 instead of 25 points) work better as dead weight to suck up wounds than Sternguard. If you are going to have a static unit that going to focus on shooting every turn then I think Devastators are the way to go.

Next a comment on the Razorbacks. So I LOVE Razorbacks. Always have, always will. Mobile firing platform that can transport marines. Hells yes!! One large downside to them (which I realized in our second game this past gaming session) is they are an easy kill point. They are even more tempting than rhinos in a kill point game because they are more strategically advantageous and have the same defensive (armor + smoke launchers) capabilities. I think they become a lot more useful if they are paired up with other scary high toughness (marines don't have much of that... bikes...) or high armor units. They are cheap fire power, but they are fragile so it they become more effective if your opponent’s high strength weapons are focused on other more threatening "high toughness" units.

I agree with this assessment also, but my plan for this squad is to deploy it well initially so that the marines and Razorback are in cover or far back on the board to do their shooting. Hopefully people will be focused on the Drop Podding Sternguard or the Vindicator or the Assault marines running at them and that will give this squad two or three turns of relative peace to shoot.

I like it! I agree that if your opponent has other "more important" stuff to deal with then using the razor back is a great way to get a cheap heavy weapon onto the table.

Another thing to consider is you aren't fully utilizing the Razorback if you aren't ever planning to transport marines. It's still a good deal if you don't plan on doing it, but you can get more out of it.

I have been thinking more of the Razorback as primarily a fire support element and only secondarily as a transport element. IF the marines run out of targets and IF the Razorback is still alive I'd happily use it to get that squad (or another one) somewhere else with better fire lanes, but my primary vision for this guy is as a baby Predator.

I didn't think of the Sternguard as a heavy weapons platform and I think it makes an interesting well rounded mobile/static firepower unit. Stay with me a second. Lets take 6 Sternguard in a HB razorback w/ 2 missile launchers and a power fist/bolter sergeant. This squad would be very good at taking away a forward firing position from an enemy squad with close ranged firepower (different bolter ammo, pistols for heavy weapons), assaulting (2 attacks + power fist), and mobility of the Razorback. Once they take away the firing position (potentially an objective that you want to block from your opponent) they can sit there and fire at both tanks (w/ 2 missile launchers at strength 8, and you probably have a good angle for side armor since you moved forward) or more effectively at infantry (with special ammo and template missiles). Plus if the Razorback survives it can sit there and just mow down infantry (targeting either a separate unit or the same one). Just an interesting idea. The squad can also sit back and move forward later in the game to take away an objective.

This is a fun idea that I hadn't considered. I like it in theory but I'm worried about how well it would work in practice. Since it's not open topped, the Sternguard couldn't assault the turn they came out of the Razorback. I know if I saw a squad like that sitting out looking like they were getting ready to assault my lines I'd probably take the time to get rid of it. Yes, they have 3+ saves but that only gets you so far and there are only six of them. It does sound like something worth exploring though. Also, I might add a combi-flamer or two to really add some punch to the pre-assault shooting.

I wasn't particularly thinking about having the Sternguard assault themselves the first time they get out of the razor back. With the 5th ed (even in 4th??) rules, having a squad roll up and lay a bunch of bolter fire down (in rapid fire) is pretty good (Even better with special ammo). The power fist is more there to detract the other squad from assaulting them or allowing them to assault during the second turn if they want to. I picked a power fist because it doesn't have any downside to being used with a bolter (which you want to use more often anyways).

So some other things that I just thought of. It might be better to have las cannons than missile launchers, but they are also more expensive for a unit that would have a good chance of taking a lot of wounds. Also, they brought back one of my favorite Razorback weapons load outs with the new codex. Twin linked plasma rifle (that doesn't over heat since it is on a tank) plus las-cannon (only single linked). As a side the twin linked las cannon on a razorback will hit better than a weapon firing at a 2+ so you are going to be able to get a hit almost every turn. Twin-linked las cannons are really killer (which is part of the reason I like the land raider so much you can throw to of those bad boys out a turn and touch two separate units (at least in the BA codex, not sure about machine spirit in the new one. I know it's different)).

OK OK, last thing. I totally forgot that transports can transport other squads besides the dedicated one now so you can have that razor back transporting another infantry squad forward (troops choice) late in the game after laying down firepower for the beginning.

We'd love to hear what anyone else things about this idea. It is probably something that I'm going to try the next time I play but since that isn't often I'd enjoy a lively debate about it!