Posted by Simon on September 20, 2009
A nice lazy weekend has resulted in my Dread getting finished. 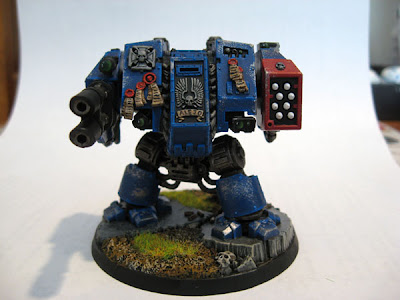 I gave sponge weathering a try after putting it off for a while (I could never bring myself to try something new like that one a model that was already done!). I tried using grays and browns as the chipping color but neither gave good contrast on the blue. 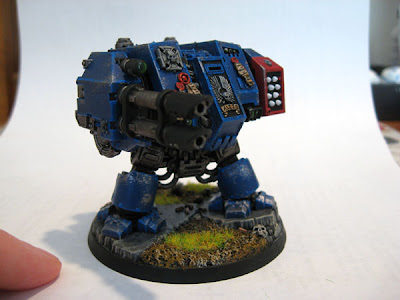 I settled on Boltgun Metal for my chips and after a bit of practice on some paper I went to town on the Dread. I'm not really thrilled with how the sponge applied the paint to the model. I was imagining the shapes being more variable in size but most of them are the same, tiny, size. 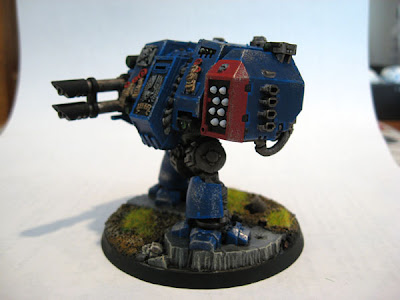 Overall though, I'm really pleased with the model. I'm glad I only put the red on the missile launcher and didn't put any on the las cannons - I think it would have looked gaudy on both sides. I'm also glad I tried the sponge weathering, even if it didn't turn out as well as I wanted. 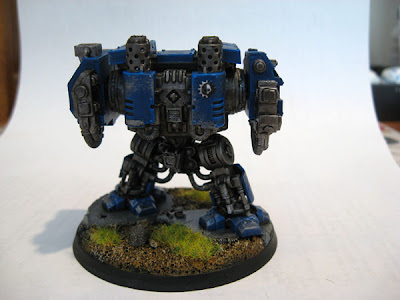 my favorite little detail is the mechanicus symbol on the engine

Has anyone had any success with sponge weathering? I've read a few tutorials that say "take some blister sponge, dip it in paint, and apply to the model," which is what I did but I didn't get the same results. I'd love to hear any tips or thoughts that anyone has to share.
crimson fists painting warhammer 40k