Posted by Simon on September 15, 2009
I'm a bit surprised at home much I'm enjoying this model. The metals are done (at least until the detail phase when I'm sure I'll find some more) and I just finished the blue. There really isn't much left to this guy, just the details you can see on the front and the mechanicus symbol on the back. 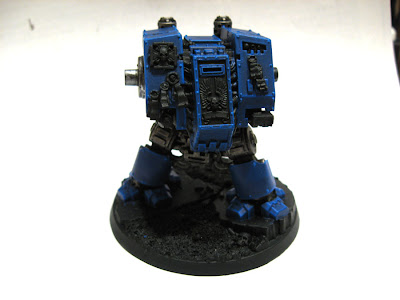 I have his arms primed but I haven't done anything to them yet - they'll get the same treatment as the body. He's going to be armed with a missile launcher and TL las cannon and I'm trying to figure out how to incorporate the red fist motif onto these weapons.

The missile launcher is pretty easy (I'll do the front housing thing in red) but I'm not so sure about the las cannons. I don't think the barrels would look good in red but if I do the main shoulder part in red it will look strange since the missile launcher won't have that. Anyone have any thoughts?
crimson fists painting warhammer 40k