My Thoughts on the Space Wolves Codex 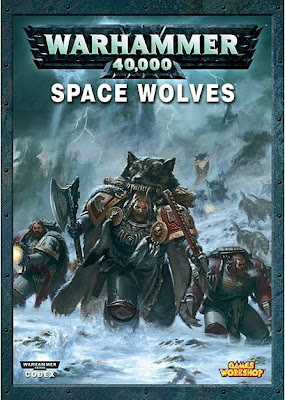 I'm not much of a gamer (I'm lucky if I can play a half dozen games in a year) so I won't be saying much about the the effectiveness of the codex from a gaming standpoint. This is more of a review of the codex as a whole - the models, the stories, the history, and the unit descriptions.

What I liked:
The new kits look to be pretty great. For once I'm not at all interested in the character models but the power armour box and the Wolf Guard box look great. There are tons of bits in each one and they can either be used alone or combined with vanilla marine kits to do double duty.

Games Workshop look to have gone the extra mile in crafting a list that is true to the fluff. The option for up to four HQ units, Lone Wolves, sagas, and the restrictions on characters taking identical wargear really emphasizes the heroic nature of the chapter.

Blood Claws are are actually reckless unless reigned in, hit like a ton of bricks, and can be in packs of up to 15 models ('cause none of them have died yet). Grey Hunters can take two special weapons and no heavies and max out at 10. Long Fangs max out at six models and are smart enough to divide their fire. This matches the fluff exactly as it is presented at the beginning of the codex and means that someone like me doesn't have to feel like I'm forcing the list to build like I imagine it should be.

The Warriors of the Fang section was well written and helped to make up for the otherwise lacking fluff sections of the book (see below). I find that Games Workshop usually does these sections well but this one in particular was very good.

Page 80 is dedicated to the different squad and Great Company markings that Space Wolves use. I can spend hours looking at stuff like this and use it when I'm trying to paint my models.

What I didn't like:
My major complaint with this codex is the fluff itself. A lot of it feels poorly written and sophomoric - yes, they're space vikings, but they're not goofy. I really got this impression when reading the War in the Sea of Stars section. None of the stories seemed particularly grand or exciting, and a lot of them painted the Space Wolves in a childish, petulant light.

The one time they do talk about the exploits of the Space Wolves at any length is well done, but it only happens once. The sections about Fenris, the chapter's history, and the Great Companies were also good but just not enough. The Space Marine Codex was full of long and short stories detailing many encounters and battles the Ultramarines were involved in, and in sufficient quantity that I felt I had a good grasp on the chapter. The Space Wolves Codex had just enough to get me interested and then it was over.

My only other complaint is that I wanted more photos of models in the A Company of Wolves section. Again, comparing it to the Space Marines Codex, I just didn't think it had the same breadth and depth. There are so many conversion opportunities and chances to showcase the versatility of the new kits that I wanted more. They've been putting a ton of good stuff on the What's New Today blog - why not include this in the codex?

In Conclusion:
Overall I found the codex to be good for what it was, but lacking the amount of depth I wanted.
space wolves warhammer 40k