Posted by Simon on November 30, 2009
As awesome as 'jacks are in Warmachine, infantry is often more effective and cheaper points wise. The main line unit I've been using in my army is five Man-O-War Demo Corps. I bought them because their models are awesome and they're pretty easy to use - the biggest tactical decision I have to make is whether to boost the damage on their attack or get a second attack. Eventually though, I'd like to have a second unit I can use with different 'casters and I'm going to look at two possibilities here, the Iron Fang Pikemen and the Man-O-War Shocktroopers.

Speed: Iron Fangs are speedy at SPD 6 compared to the SPD 4 of the MoW.
Strength: The MoW units come out on top here with STR 9, three more than the Iron Fangs.
MAT: Pretty similar here, although the MOW edge out the Iron Fangs 7 to 6.
RAT: Mostly a non-issue since the Demo Corps and Iron Fangs don't have guns.
Defense: Iron Fangs are a little harder to hit at DEF 13 to the MoW's 11.
Armour: Here it gets interesting. Iron Fangs have 14, Demo Corps have 16, and Shocktroopers have 17.
Command: Everyone is even at CMD 9.
Damage: Iron Fangs are single box models and MoW are 8 boxes each.

Iron Fangs are faster and a bit of a softer touch, MoW are slower, stronger, and tougher. 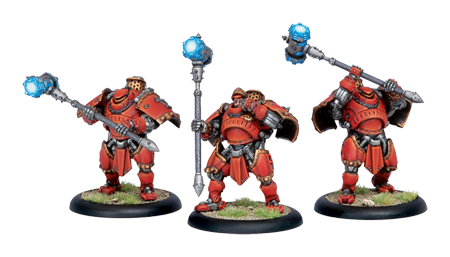 Second, a look at weapons.

Having Reach and a consistent P+S regardless of who I pick is pretty nice. Critical Knockdown is a plus and sets the Iron Fangs a little above the Shock Troopers, but I wouldn't base my strategy on getting it. Demo Corps come out on top here - the option to boost a damage roll for tough targets or get a second attack on squishy targets gives them great flexibility.

It's also good to remember that the Shock Troopers have a 6", POW 12 gun that they can use. 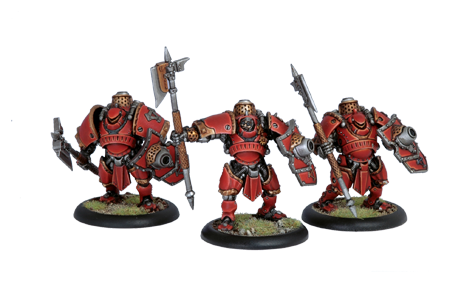 Iron Fangs can make better use of CMA than the Shock Troopers due to the larger size of their unit. They also get a little more mileage out of Shield Wall because they're the faster unit. Shock Troopers, already the most durable of the three units, get even tougher behind their shields and can still sneak in an attack with their Shield Cannons. Demo Corps lose out here a bit but still walk away Fearless.

Iron Fangs seem to be the unit of choice if you need some pace. They hit the weakest, but not by much, and they have CMA to make up a little of that. Even with Shield Wall they're probably the most vulnerable with only a single health box. If you're looking for a quick unit with a good CMA and good durability for single wound models, these are your guys.

Demo Corps win out for raw power. Having the option of two attacks or Weapon Master on the one attack means they'll always have the right hammer for the job. I'd rank them in the middle in terms of the three for survivability, since the Shock Troopers have +1 ARM and Shield Wall. They're also in the middle for mobility because they'll never not run to keep up Shield Wall. If you're looking for straight up face beating, go with Demo Corps.

Shock Troopers win out in durability and lose on speed (assuming Shield Wall is up). They hit pretty hard, although not as much as the Iron Fangs with CMA (5 Shock Troopers guys can only do so much with their CMA) or Demo Corps. They're also the only choice with a ranged attack so they win the award for flexibility. If you're looking for a tough unit to take down that can hit pretty hard, take Shock Troopers.

Any other Khador Kommanders out there want to weigh in?
khador warmachine