Posted by Simon on November 15, 2009
I took a trip down to the Hobby Bunker in Boston today to meet up with Press Ganger Paul and start playing Warmachine. He introduced me to three other regulars and after a bit of discussion about what to do, we decided to jump right in and played a two-team Mk2 game.

Paul and another fellow played Cryx and Mercs while myself and two other guys played a big, three person Khador team. Each of the Khador players had 35 points while the other two had three casters between them and a total of 105 points. I was a bit short on points so I borrowed a few models to fill out my list.

Another Khador player had pVlad with Beast-09 and Behemoth and a huge Winterguard unit with the UA, several rocketeers, Kovnik Joe, and Widowmakers.

The last Khador player had pButcher with a Spriggan and two Kodiaks, a large Winterguard unit with UA, Kovnik Joe, and Widowmakers.

Against us was a Cryx army of pDenegrah, the Deathjack, 4 Bonejacks of some variety, 2 units of Bile Thralls, a unit of Mechanithralls, a unit of Bane Thralls, Tartarus, and two Pistol Wraiths. The Merc player was running a Magnus battlegroup with a ton of 'jacks and a Gorten battlegroup with fewer 'jacks and two units of dwarfs - one with hammers and one with shields and guns. 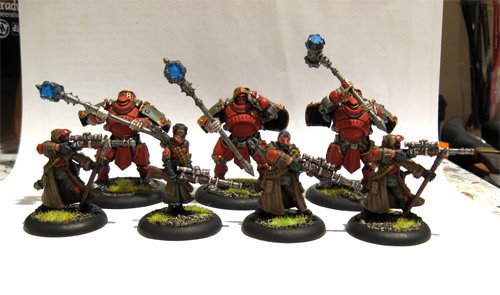 I was on one side of the table facing most of the Cryx, next to me was Vlad and his Winterguad facing the Deathjack, Bane Thralls, and Gorten, and on the other side was The Butcher and some more Winterguard across from most of the dwarfs and Magnus. Khador won the roll and chose to go first.

The first two turns were pretty uneventful. The Behemoth took apart the Deathjack, Widowmakers sniped some thralls, Denegrah arced Venom and killed some Widowmakers, and a unit of Bile Thralls exploded and killed two of my Man-O-War.

On the Khador third turn I used Sorscha's feat and froze a large chunk of the Cryx army. My Juggernaut trampled four Mechanithralls and then killed a bonejack, the remaining Demo Corps smashed Tartarus and another bonejack, and the Destroyer shot the remaining two Mechanithralls. I was feeling pretty good about it until Paul told me that he could probably kill Sorscha on his next turn.

Gorten cast Landslide and pulled me closer to Denegrah and then she feated, leaving a lot of my army debuffed. She then arced Venom through a bonejack and Gorten's 'jacks shot me a bunch. In the end I had two hit points left, but Sorscha was still alive!

After all the debuffs from Landslide and Denegrah's feat I couldn't do much of anything with my units, but Sorscha did cast Tempest on Gorten and Denegrah. Vlad was able to take advantage of that and killed both of them with his Winter Guard. On the other side of the table, Butcher took down Magnus with some more Winterguard - Khador wins! 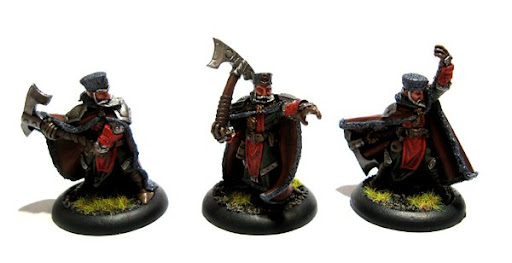 What did I learn?
What's next?