Posted by Simon on November 23, 2009
I got in two more games of Warmachine this weekend. This first was a 35 point game against Mercs. My list was:

I'm not very familiar with Mercs, so his list is from memory and may be incorrect.

On my right hand side, the Demo Corp, Widowmakers, and Kell worked through the Steelheads and a few Forgeguard. I lost four Demo Corp in that combat but they held my right side pretty well.

On the left, I ran my Manhunter down the flank and was able to engage a Gunner on the second turn by running into melee with it. My opponent put two focus on it to try to bash the Manhunter but it didn't work and the Manhunter would nearly kill it before getting hosed by a spray from Thor. Even though he didn't kill the 'jack I think his ability to distract around six points of models and cause those two FOC to be wasted was quite useful.

The Koldun and Destroyer hung out on the left / middle, Sorscha was in the center with the Kodiak, and the Greylords with just behind them. On my second turn I put three focus on the Kodiak and charged it into a Driller. The Kodiak took about half of it's boxes off before throwing it into Durgen. 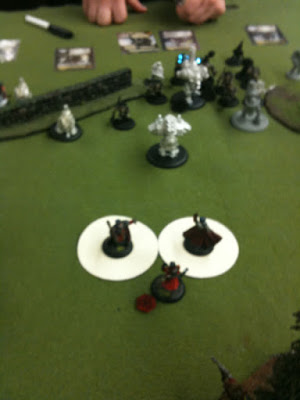 just after the Kodiak threw the Driller

On his turn, my opponent charged the Forgeguard into the Kodiak and wrecked it. He made a mistake and left Durgen sitting at the top of the ring of Forgeguard and in my LOS. Sorscha moved up and feated, freezing the Forgeguard and Durgen, and the put a Hand Cannon shot and two Razor Winds into him. The Destroyer dropped a bombard and the remaining two Widowmakers hit him twice, leaving Durgen with two boxes left. The last Greylord walked in and used his spray to end the game as a win for me!

I should say that none of this would have happened if my opponent hadn't explained to me how to kill his 'caster, so I can't take full credit for the assasination but it was still exciting to get the win and see my army work.

What did I learn? Being aggressive with my models is a good thing. The Koldun Lord got to use his spray once to kill some Forgeguard and the Greylords weren't limited to putting Blizzards on things. Everyone got involved and it just added to the number of threats I had on the board. The Kodiak, Manhunter, and Kell were all productive for me and proved to be useful additions to the army.

The second game was a battle-box game because I was a little pressed for time. I played the same guy and he used the Gorten box. I asked him not to throw himself under the bus this game and he happily obliged.

In the first two turns he moved Gorten, the Driller, and one Gunner down the center and the other two Gunners down my right flank. I was able to catch the two Gunners in melee after putting Boundless Charge on the Destroyer but didn't kill either of them. I thought I was doing well after my second turn with Sorscha hiding behind the Juggernaut. The photo below is the end of my second turn and moments before I got smacked. 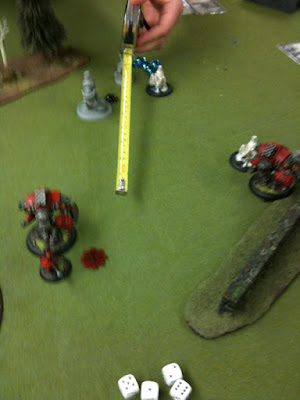 He moved Gorten off to the right a bit and feated. The Juggernaut and Sorscha were pulled forward six inches and suddenly, the Driller had a direct line to Sorscha. It got loaded up with Focus, charged into her, and she went down to a few boosted POW 21 Drill attacks.

What did I learn? If I get within 14 inches of Gorten I need to be very careful not to allow charge lanes to Sorscha. That limits my options a bit since he can stop my AOEs with a spell but hopefully I'll figure it out.

Sorry for the fuzzy photos, I was using my phone's camera.
battle reports khador warmachine