Posted by Simon on December 17, 2009
I've now played my first 10 games of Warmachine and I thought it would be appropriate to look back on my army and see how everything has performed. I'm 2.5 painted models away from buying some new units for the army and I'd like to look at the strengths and weaknesses of my list to see where I can improve. The list is: 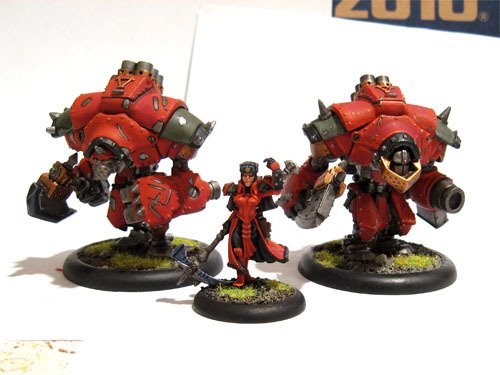 Kell Bailoch
Kell is a 2 point solo who operates as a 5th Widowmaker. His MAT is a little better than the Widowmakers and if he stands still he gets a second shot. He looks great on paper but I'm not totally sold on him. If he moves his effectiveness is cut in half and now I'm paying 2 points for one shot when I still get full effectiveness on the move from my Widowmakers. He has his uses but he may be more situational.

Manhunter
I love this solo. He has never failed to be very effective and almost always kills back his points. On the rare times when he doesn't, he ties up quite a bit more than he's worth for a turn or two to allow the rest of my army to be effective. He's a threat on the flanks that causes my opponents to think hard about their deployment and he functions well as a 6th Man-O-War or a bodyguard for Sorscha.

Greylord Ternion
Another very effective unit for me. In my first few games I wasn't using them very aggressively and they weren't performing well but since I've started moving them forward more they've become very good for me. Early on their Blizzard spell helps keep my Man-O-Wars safer from shooting. In the mid and late game their sprays are good for cleaning out infantry or knocking a few damage boxes off a 'caster, and I've used them as a one turn screen for Sorscha to keep her safe. The Ice Cage is a little less useful but the one time I tried I managed to get a 'jack stationary.

Widowmakers
These guys are great but I'm still struggling to be confident using them. I want them shooting every turn so early positioning is important, but often I leave them too far forward to get charged or my opponent moves his army and they can't get shots off at infantry. I haven't had any success yet killing systems on 'jacks but I think as I get better with this unit I'll have more opportunities. I'm going to need a few more games to get these guys down.

Man-O-War Demo Corps
I love these models but of everything in the army they're probably the biggest liability. They're slow, easy to hit, and go down surprisingly quickly when my opponent wants them to. They're expensive at 9 points and once they're gone my army is a little stuck dealing with tough targets. They're also easy to tie up with infantry since good positioning means I can only kill one a turn, even with Backswing. I wouldn't say they've been a liability or ineffective for me but they're the first thing I'm thinking of changing.

Destroyer
This 'jack is hefty at 9 points but quite brutal. Being marshaled by the Koldun Lord means that he can boost the attack and damage rolls on the bombard almost every turn which is very effective. The two of them usually take a flank and sit just behind the main lines arching bombards. They're 11 points in total though, which is nearly a third of my army and sometimes I'm not sure they're doing enough. I'll probably stick with them for a while longer and see what happens.

Koldun Lord
Another two point solo who has been quite effective for me. His 'jack marshal and Power Booster ability make the Destroyer a lot more effective than Sorscha would be able to. He usually hangs back a bit from the front lines and since he's almost always using Power Booster I don't get to use his spells all that much. He and the Destroyer can be game changing but can also be big flops when the bombards don't fall my way.

Kodiak
I'm a big fan of this 'jack. I do my best to use Grab and Smash whenever I can. I'd love it if he did a little more damage in melee but he's still my go-to 'jack. The Heavy Boiler makes him focus light, Pathfinder means I'm not worried about terrain, and the model is sweet. I need to work on getting him more involved while also not getting destroyed because often it's one or the other. I may pick up a second one of these.

Sorscha
The more I play with Sorscha the more I like her style. Initially I wanted her to be a beatstick who used her spells and feat to set herself up to kill the enemy 'caster but I've found that not to be the case. I've had a lot more success using her as a support 'caster for the rest of my army, using her spells and feat to allow my army to more effectively kill everyone. I've had a lot of success using her feat to set up my troops to decimate the opponent's army, using the Hand Cannon and Razor Wind to pick off important models, and generally just have her run around and be a nuisance. I'm getting better at having her kill 'casters but I'm still looking for her to be a supporting model first and a beatstick second.

Coming up next, Part 2: Where I'm Going
khador warmachine