The three areas I'm unsure about are Kell, the Koldun Lord + Destroyer combination, and the Demo Corps. The first two aren't things that I really feel the need to change - they've been effective for me so I'll keep them in for now and see how they continue to perform.

The Demo Corps however, are up for a change. As much as I love the models and the image of those glowing blue hammers swinging back and forth, I think 9 points for the unit is just too much for what they're giving me. They're quite powerful but are hampered by their speed, are a big target and easy to hit, and are just too expensive.

So, who's going to replace my beatstick infantry? The Great Bears! These guys have everything I like about the Demo Corps (except the hammers) and more. They're functionally ARM 16, which is the same at the Demo Corps, but have better a better DEF of 13. They move much faster at SPD 6, can't be knocked down, and have a 360 degree front arc for making better use of Backswing. They're also Weapon Masters, which means I no longer have to make the decision to get two attacks or boost a single attack - they can always make two boosted attacks! 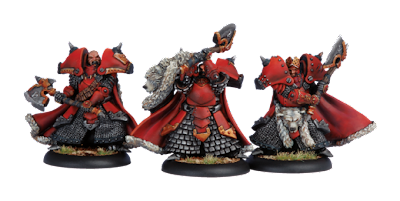 Great Bears - image from Privateer Press
They hit a little lighter at P+S 12, are only 3 models to the Demo Corps' 5, and have fewer health boxes, but overall I think they're going to be an improvement. Especially considering they only cost 5 points, because that leaves room for me to add a Drakhun. 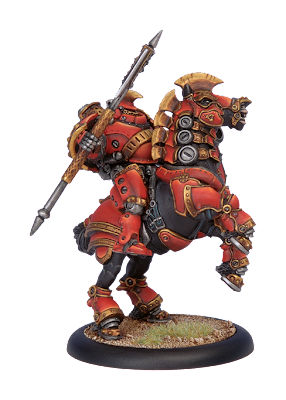 This guy is a cavalry solo so he's moving at SPD 7 and has ARM 19. He gets a P+S 14 Weapon Master attack per turn, plus whatever his mount can do, and he also has the option for a ranged attack. He can't be knocked down and can make counter charges against models ending their activation near him. He costs 4 points, which means I can add him and the Great Bears for exactly 9 points, the same as my Demo Corps.

I like this option because it gives me to different, fast moving threats compared to my one, slow moving unit in the Demo Corps. Both of these units hit like bricks and are more survivable, plus the models are sweet.
khador warmachine