Posted by Simon on December 12, 2009
This weekend I managed to get in three games against two different Hordes armies. The first was 35 points against Legion. 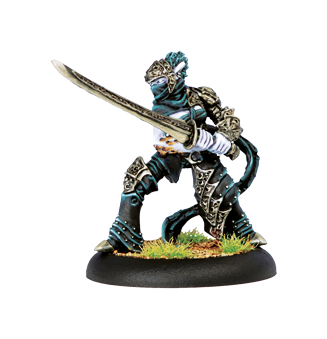 Rhyas - image from Privateer Press
I was not prepared to deal with 20 SDP 6 (SPD 7 with Dash), DEF 14, Weaponmasters in this game. My opponent spread them out in a wide front with two or three ranks and then ran them straight at me.

After having Sorscha feat to freeze the huge wave of Swordsmen I killed a bunch of them and largely took no damage in return on his turn since everything was frozen. I saw an avenue to kill Rhyas on my next turn but I missed with the Destroyer and all three Greylord sprays so I backed out.

On his turn Rhyas feated and when everything was done I had lost most of my army, but Rhyas was sitting in the open and only protected by being incorporeal. Sorscha has a magical weapon so that isn't an issue, and a few minutes later I had the win!

The other two games were modified battle box games against a Skorne player. I was using Sorscha, a Kodiak, and a Destroyer. 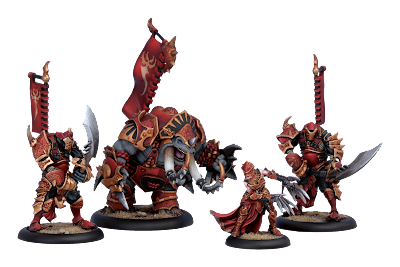 This game started off very poorly for me because I didn't realize what Admonition could do. I managed to sneak off a charge on one of the Savages using Kodiak and Boundless Charge, only to have the Savage jump away when I got there. I expected the Kodiak to get boxed and leave me a 'jack down without having done any damage to him, but the Savage and Bronzeback were unable to take it down.

Sorscha used Tempest to freeze both Savages and her and the Destroyer put some damage on one of them. On of the Savages had Abuse cast on it and caught Sorscha in a charge but couldn't kill her. Morghoul moved in and feated, hoping to stall Sorscha for another turn.

Since these games go quickly we just set up again. The Skorne player took out the Bronzeback and added a Gladiator.

I started a little more conservatively after the early mistake I made last game, but I made another one this game in forgetting that Abuse gives +2" of movement. Sorscha got charged by a Savage and left with two points of health, while a second Savage moved up quite close.

My Destroyer charged the Savage engaging Sorscha but it had Admonition on it and jumped away. I hoped to have the Kodiak use Grab and Smash to throw the other Savage into the jumping one, but he missed his attack roll and I couldn't pull it off. I don't know why I didn't use Sorscha's feat defensibly here.

On his turn, the Skorne player had the Gladiator slam my Destroyer over Sorscha and kill her.
battle reports khador warmachine