Posted by Simon on January 06, 2010
Even though there was tons of snow in Boston over the holidays I still managed to do a fair amount of gaming with Spoony, who was visiting for a few weeks.

He had recently bought Space Hulk and we took turns playing the first mission. I lost pretty quickly playing the marines first and then lost again playing the Tyranids. I did manage to win on my second attempt with the marines using Spoony's own strategy against him, although it was a very close run affair.

We wanted to play through the whole game but family, snow, and time conspired against us and it didn't work out. The game overall was a lot of fun. It has a palpable level of stress for the marine player with the timer and seeing the blips everywhere. Hopefully we'll get a chance to play again.

While I was visiting my family for a few days in New Jersey Spoony got bored and found himself buying some Warmachine models after listening to me go on about the game. When I got back he really wanted to play, so over two days we squeezed in five games.

Spoony was playing a Cygnar army made up of Siege, the Thunderhead, and a Defender. 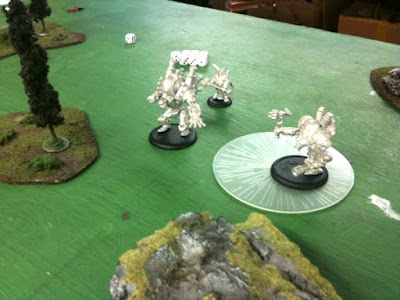 I was playing with pSorscha, a Kodiak, a Destroyer, and Widowmakers. I didn't want to take the Widowmakers but because the Thunderhead costs so much I had to come up with 4 points somewhere. 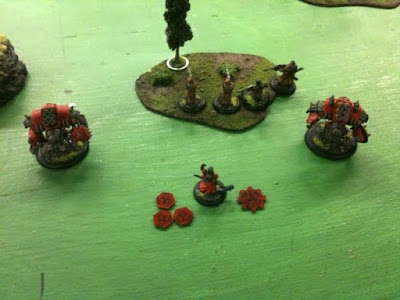 He beat me in our first game. Siege feated and the Thunderhead did 18 damage to Sorscha with a Lightning Coil shot. I thought I was safe because Sorscha was sitting on DEF 18 but Spoony rolled a 12 on three dice and that was that.

The next three games all went my way. Each time I managed to get Sorscha into range for a Wind Rush + feat + charge that left Siege dead. The games were all quite different up to that point but the end was the same. In one, the Thunderhead totaled my Kodiak on Siege's feat turn by doing 18 damage in one hit. In another, the defender took out my Destroyer's cortex with three hits of its hammer in melee.

In our last game I pulled the same stunt on Siege but rolled poorly and left him with two health boxes. He and the Thuderhead squished Sorscha next turn.
battle reports khador warmachine