Thoughts on The Butcher of Khardov

Posted by Simon on January 22, 2010
Before I started playing with Sorscha I did an overview of her to help me organize my thoughts on her abilities and figure out how I might want to run her. Next weekend I'm planning to start running lists with The Butcher so I'm going to do the same thing with him. 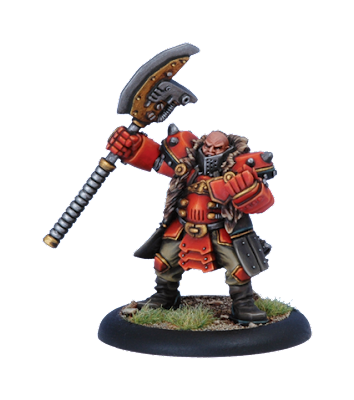 The Butcher - image from Privateer Press

Stats
The Butcher is slow and pretty easy to hit for a 'caster. He has very high STR and MAT stats so he hits like a ton of bricks, and his ARM 18 means that he can take a punch. His CMD is a low 7 so he's not the best leader of troops and he has an average FOC stat of 6.

Feat
Friendly faction models gain an additional die on attack damage rolls this turn - awesome. This feat doesn't discriminate between ranged or melee attack rolls, doesn't prevent 'jacks from boosting those same attack rolls, and stacks with charge attack rolls. A model with Weapon Master, on the charge, combined with this feat, will be rolling 5 damage dice. Obviously, when using this feat the goal is to maximize the number of models in The Butcher's control range to to get the biggest effect.

Abilities
Terror - enemy models need to pass a command check when The Butcher is in their melee range. This might be useful against a low leadership unit but The Butcher can probably kill enough models to force the command check anyway.

The star of the show is Lola, The Butcher's giant axe. It's Magical, has Reach, Weapon Master, and hits at POW + STR 16; My Kodiak doesn't hit this hard. Anything that gets within 10 inches of Lola is probably dead. 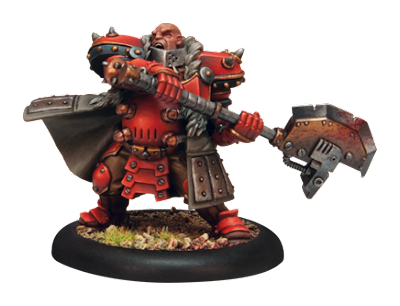 The Butcher - image from Privateer Press
Spells
The Butcher's spell list is small at four but it has something for everyone.

Fury
A two focus upkeep spell that grants a model / unit +3 STR and -1 DEF. This combines well with his feat do really put the hurt on something. The -1 DEF is annoying but Khador stuff in general is easy to hit, so it isn't a huge deal.

Iron Flesh
Another two focus upkeep spell that will give a warrior model / unit +3 DEF and -1 SPD. In an already slow army the -1 SPD can be a big deal but if you can get this on a unit that doesn't move much (Widowmakers come immediately to mind) or has already moved that turn, the +3 DEF can be a life saver.

Full Throttle
This is the spell I'm most interested in because it allows The Butcher to run 'jack heavy. For three focus all 'jacks starting in The Butcher's control area can run, charge, trample, and slam for free. Also, 'jacks in his control area get free boosted attack rolls. On feat turn, The Butcher's 'jacks can charge for free and have boosted attack and damage rolls - that's a ton of free focus! Throw Fury on one of those 'jacks or dish out some focus for them to buy more attacks and you're looking one a very deadly charge turn.

Obliteration
This spell is expensive at four focus, but it throws out a 4" AOE at POW 15 with a 10" range. I don't see myself using this spell much, but I'm sure a situation will arise where an AOE this powerful would be useful.

Conclusions
The Butcher is a melee monster, so that's where I'm going to try to get him. His spell list is small but versatile, with great support for troops and 'jacks and a workable AOE spell. He is slow and easy to hit, and his medium sized base means he's hard to hide so keeping him safe will be tough.

Here's the 35 point list I'm thinking of running with him:

The three 'jacks and The Butcher are going to be a big armoured threat right down the middle. The Great Bears will either anchor a flank or ride behind the 'jacks. The Widowmakers, Kell, the Manhunter, and Orin are all good options for holding flanks, harassing my opponent's solos and units, being distractions, and causing general mayhem.

The list itself is pretty straightforward to use and should be fun to play.
khador warmachine