Posted by Simon on February 08, 2010
Two more games with my new Butcher list this weekend resulted in two more defeats, but I'm getting closer to making it work. My list was:

My first game was against the same Cygnar player from last week. He was running a similar list:

Deployment was similar this game. Trenchers up front, Stormblades on my right hand side, 'jacks and Haley behind the Trenchers. I put my shooters and Manhunter on the right, the 'jacks center with Butcher, Orin, and the Great Bears just behind them. 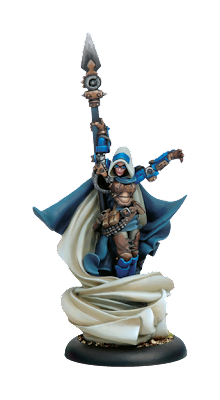 Turn 1
He moved the Trenchers and GMCA up and took out Kell and two Widowmakers. Everything else walked forward and Haley put Deceleration on the Trenchers.

My three 'jacks ran forward with Butcher and the Great Bears behind. Butcher put Fury on the Spriggan and Iron Flesh on the Bears. Orin zapped two Trenchers and the Widowmakers shot two more while the Manhunter ran down the right flank.

Turn 2
Haley moves up and feats, getting everyone but my Manhunter and two remaining Widowmakers. She also casts Telekinesis twice, turning the Spriggan around and moving the Ironclad forward. Something tags one of the Great Bears and the Defender deals six or so points of damage to Butcher. The Ironclad slams the Spriggan, hoping to slam it over the Greatbears but he rolled a 1" distance and didn't do much damage.

Under Haley's feat I move the Great Bears to engage the Lancer, the Spriggan and one Kodiak to engage the Ironclad, and the other Kodiak forward. One Widowmaker gets the GMCA and the Manhunter moves to threaten the Storm Blades. Orin zaps the last two Trenchers.

Turn 3
Haley casts Telekinesis again, moving the Spriggan and Kodiak away from the Ironclad, who charges Butcher and leaves him with a single health box. The Storm Blades assault the Manhunter who manages to dodge three of the four blasts before being pasted on the fourth.

My first feat turn! Butcher casts Full Throttle and feats. He attacks the Ironclad twice and nearly trashes it on his own before letting the Spriggan finish it off. The Kodiak not near Butcher charges the Defender, hits it quite hard on the initial attacks, and threw it into the Stormblades. The throw wrecked the Defender and managed to kill three Stormblades and the Widowmakers killed two more. The Greatbears rolled horribly, even with four dice on each attack, and couldn't finish the Lancer.

Conclusions
This game went a lot better than the first, and had Butcher had a little more life I probably would have won. He was down to his Squire, Haley, a badly damaged and engaged Lancer, and four Stormblades who were way out of position. My Great Bears would have finished the Lancer and all three of my 'jacks were fully operational. As I think about it now I may have been able to protect Butcher by having the unengaged Kodiak move between him and Haley and Vent Steam to create a cloud to block LOS. She may still have won but it's something to think about for next time.

The second game was against Skorne.

I deployed the same as I have been. He set up with Morghoul, the Titans, and Immortals in the middle with the Swordsmen, Cyclops, Guardian, and Paingivers on my right. 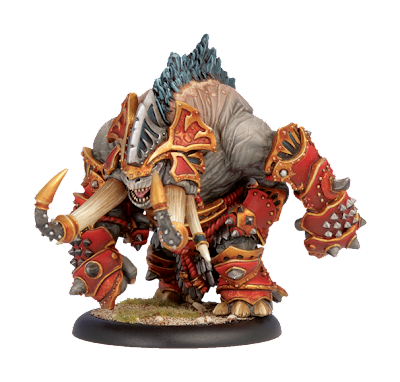 Turn 1
The 'jacks, Great Bears, and Butcher run up. Orin zaps two Swordsmen and the five snipers kill another six.

The Skorne army moves forward as a group. The last two Swordsmen run forward to engage the Manhunter and Great Bears. The only real action came when the Cannoneer shot and killed Orin.

Turn 2
I try to free the Great Bears by shooting the Swordsman but three shots miss him and hit my Bears instead. The Manhunter kills his Swordsman and one Great Bear takes care of his while the other two charge the Cyclops but don't kill it. The other snipers take care of a few Immortals and the Manhunter kills the Ancestral Guardian. I get a little indecisive with my 'jacks, not wanting them to be charged and not wanting to work on the Bronzeback who had Admonition on him.

The Immortals come in to engage one Kodiak and the Spriggan but don't do much damage. Morghoul pasted the Manhunter and the Cyclops took out a Bear. Morghoul then sprinted away and feated. The Cannoneer put some damage on Butcher and the Bronzeback continued to threaten on my left side with Admonition.

Turn 3
Butcher feated and cast Full Throttle but held back from the melee. One Kodiak and Spriggan wiped out the Immortals and the second Kodiak charged Morghoul but couldn't hit him even with the boosts.

The Bronzeback wrecks the Spriggan and the Cannoneer wrecks the Kodiak near Morghoul. The Cyclops finishes off the Great Bears.

Turn 4
My last Kodiak moved up on the Bronzeback, who ran away due to Admonition. It had to run towards Butcher, who charged and killed it. My Widowmakers ran to engage the Cyclops so it couldn't threaten Butcher.

The Cannoneer charged Butcher and killed him.

Conclusions
I think I was too conservative this game with my 'jacks. The first turn I was very aggressive and took control but then I stopped and he gained the momentum. I may have been able to survive the Cannoneer charge if I had cast Iron Flesh on Butcher (DEF 17 is quite a bit harder to hit than DEF 14) - something to remember for next game.
battle reports khador warmachine