Posted by Simon on February 13, 2010
Recently I finished off a can of Games Workshop black spray primer and needed some more. I had planned to pick up a can at my local store but when I got to the rack I saw another can next to the GW one called Armory Black Primer. 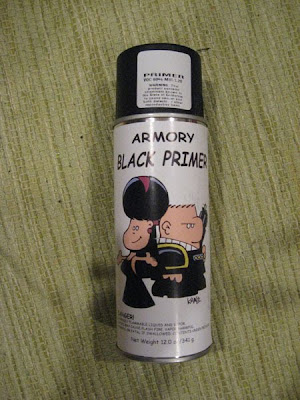 I was about to pass it on by when I noticed the price tag - $5.00. Considering that the GW spray can right next to it was priced at $15.00 I decided to take a chance and bought the Armory can. So far I haven't been disappointed. 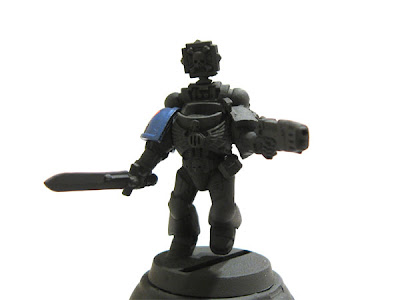 a marine primed with the Armory
I've used it on a few models thus far and had good results. The only difference I've noticed is that Armory spray has more of a matte finish than GW's. The primer doesn't fill in or obscure any of the details (which you can see on the model above). My only complaint is that when I was using it the spray was very strong and actually blew some of the smaller bits around.

I think that given the choice, I'd pick Armory over GW for my black primer. In my experience thus far the two products have been pretty much even on quality but with GW's primer being three times as expensive I'll be reaching for the Armory primer in the future.
painting product reviews