Tutorial - Making Your Own Warmachine Tokens

Posted by Simon on February 10, 2010
Warmachine games have a ton of things to keep track of. Warcasters can cast upkeep spells that buff your models or debuff the enemy models and they can cast single turn spells that do the same. On top of that many of your units and models have their own spells and abilities to help themselves or your army or make life difficult for your opponent's army. Even in a small points game a single unit can have several effects on it at one time which can make it tough to know exactly what's going on.

The normal solution to this problem, unless you have a particularly sharp mind for details like this, is to use tokens. Each time a model has something used on it that changes its base stat line or abilities an appropriately labeled token is placed near it so everyone knows what's going on.

Some companies make custom Warmachine and Hordes tokens for each warcaster. They come in little packages and have a token for each spell the 'caster has and tokens for the 'caster's focus. Here's a photo of some Gale Force 9 tokens that I bought for Sorscha: 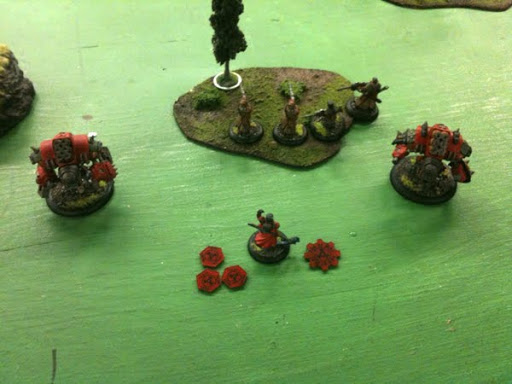 Here you can see that Sorscha has three focus remaining (the little tokens on her left) and that she has a spell in play (the larger token on her right).

These are great game aids but, at 5 to 10 dollars a pop the cost can start to add up if you're buying one for each 'caster you have. One of the guys at my local store has a cheap and effective way of making his own tokens which I've started using.

He takes those little circular labels that you find on stuff at garage sales, writes the spell's name on them, and then sticks them on pennies. Easy! 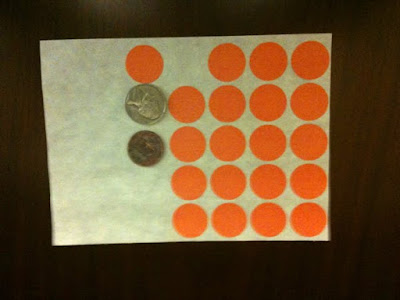 some labels with a nickel and penny for size reference
The labels that are 3/4 of an inch in diameter are just larger than a penny and just smaller than a nickel so you can take your pick. For a typical 'caster, the cost breaks down like this: 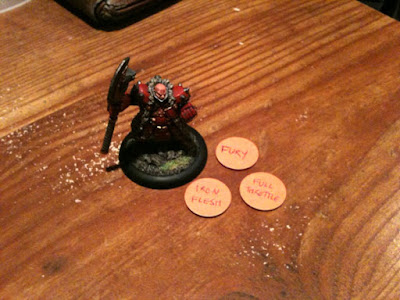 The Butcher and his new tokens
The best part is that when you get a new 'caster or unit with new spells you just grab a few pennies and you're all set. One package of labels should last you your entire Warmachine career (unless you decide to get different colors for different factions) and you could probably find the requisite pennies on the sidewalk.
tutorials warmachine