A Very Deathwatch Side Project

Posted by Simon on February 17, 2010
I'm an easily distracted hobbyist.

I get caught up in hype and excited when new models come out. Most recently I was looking through White Dwarf 360 (the Tyranid issue) and came upon the article about the new Legion of the Damned models. I'd seen them online and resisted the urge to buy them right away but something about this article had me itching to buy and paint them.

Realizing that I don't need more Space Marines sitting on my to-do shelf I started thinking about what I could do to scratch this itch. I wanted something that I could use with my Crimson Fists but that wasn't actually part of the chapter. What did I come up with? Deathwatch.

There aren't any in-game rules for the Deathwatch but I figure I can use the models as Tactical marines or Sternguard. My plan right now now to do a squad of these guys using my bits box and the old Ultramarines, Space Wolves, and Blood Ravens I have collecting dust. I'll end up with a nice squad of interesting models and will trim down my pile of stuff.

Goals for this project include:
I'm going to work on each model one at a time and when the opportunity presents itself. Right now I've started on the sergeant, who is armed with a power sword and plasma pistol. He's going to be from the Crimson Fists because they're my favorite. Here's where he is right now: 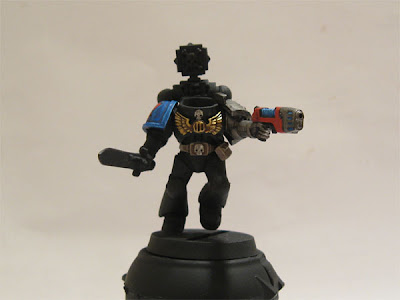 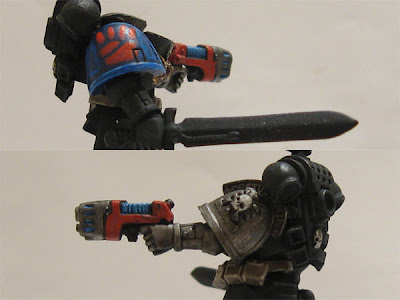 Pretty much everything on him is WIP at the moment. I'm enjoying what I've done this far, although I'm getting closer and closer to when I have to do the black armour. More to come.
crimson fists deathwatch painting warhammer 40k