Posted by Simon on February 03, 2010
jack frost from the PP forums posted a spoiler about the new Widowmaker Marksmen

"1 more point than a wardog"

If the rumors are true, we're getting a solo who looks like this: 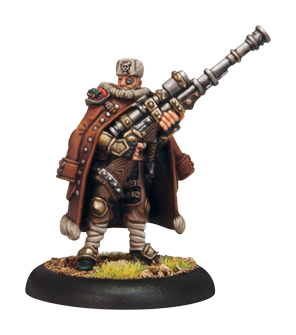 The spoiler wasn't clear on whether this guy has Advance Deployment and Pathfinder. jack frost starts off saying that he's the same as Widowmakers with the following differences, but then lists some abilities that Widowmakers have. Who knows.

There was some unhappiness on the forums about this guy. I think a lot of people were hoping for a more powerful gun and what they got was a model who costs as much as two Widowmakers but doesn't, on first blush, out perform them.

I think he's a pretty cool model. He increases the range on Widowmakers by 2" (14" for the shot, then move back 2") and there isn't much that will catch them from 16" away. He certainly doesn't put out the hurt like two Widowmakers do, but you're paying a little extra to make them a better unit.

Generally I put my Widowmakers in cover somewhere, and between cover and Camouflage this guy will be sitting at DEF 18. Add Stealth into that and you have a very survivable problem for your opponent to deal with. Since he's hanging out alone he'll be harder to hit with scattering AOEs and he can't really be shot at directly because of Stealth, so it's going to take some focused resources to silence his gun. Again, he doesn't have the same killy potential as two Widowmakers but if my opponent has to divert a combat unit or 'jack to come over and deal with him I think he's earning his points.

Finally, for 8 points you can get Kell, the Marksman, and 4 Widowmakers and assign 7 points of damage wherever you'd like. That's more than a column of damage on even the biggest 'jacks and enough to decimate a unit of infantry. Pretty awesome.

I'll probably try him both as a substitute for Kell's 2 points and in addition to him for a big sniper contingent.
khador warmachine