Posted by Simon on March 08, 2010
I haven't been down to my local store in two weeks but today was free and I got two games in. Both of them were against the same tier 4 Nemo list. I was using my Butcher list. 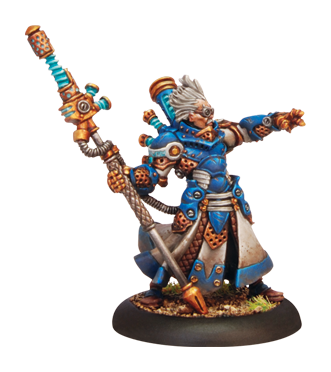 Nemo - image from Privateer Press
Game 1
This game was a total mess for me and clearly illustrated the point that what you don't know in Warmachine will kill you. At tier 4 all of Nemo's 'jacks get +2 SPD on the first turn. My opponent used that to run his Lancer and Thunderhead right up into my lines, but just far enough that I couldn't charge with my 'jacks.

I moved my three 'jacks up in a line in front of Butcher, planning a counter attack when the Thunderhead charged and killed one of them. Instead, Nemo arced Voltaic Snare onto the Kodiak in the middle. I wasn't familiar with this spell and had my 'jacks clustered close enough that all three were pinned.

Since those three 'jacks represent about two thirds of my army and I was pretty powerless to stop Nemo from repeating that every turn the game was pretty much over at that point.

Game 2
After the fun of last game I kept my 'jacks spread out and made an early and aggressive push on his Lancer to keep the arc node under pressure. He was able to arc Chain Lightning and kill my Widowmakers early on but otherwise I kept the arc node on its back foot.

I played a little more conservatively this game and let him come towards me. He tried a bad assassination run with the Thunderhead on Butcher but wasn't able to do much. On my next turn I feated and the Great Bears fully trashed the Thunderhead and a Kodiak wrecked the Charger. 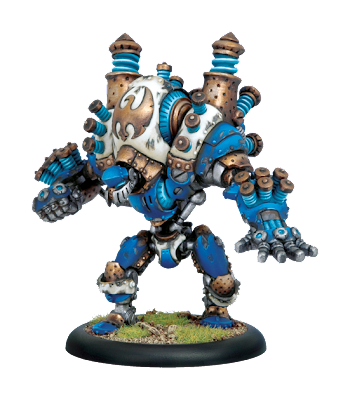 Thunderhead - image from Privateer Press
The game turned into a slugfest with the Great Bears chopping up a unit of Stormblades, getting killed, and then Butcher finishing off the unit with Obliteration. On the other side of the board my second Kodiak vented steam to kill four Stormblades and then Butcher followed up with a second Obliteration to get the unit.

At this point I had the Kodiak and Butcher against Nemo, a Lancer, the Squire, and one Stormsmith. Butcher got slowed down by all of the wrecked 'jacks on the board trying to get to Nemo. The Stormsmith kept the Kodiak disrupted while Nemo and the Lancer slowly whittled it down. The Kodiak eventually fell but that opened up a lane for Butcher to cast Obliteration on Nemo. I boosted the hit and damage and did enough to leave Nemo with two boxes (he was camping two focus). Next turn Nemo and the Lancer were able to take down Butcher.

Even though I lost both games I learned a lot about my army. I've never really though of Obliteration as being very useful but today it accounted for about five Stormblades, a Stormsmith, and very nearly Nemo. I also made great use of Vent Steam, something else I've rarely used.
battle reports khador warmachine