My Introduction to Malifaux

Posted by Simon on March 31, 2010
This past weekend I played a game of Warmachine with the local Malifaux rep. After the game he gave me a demo of Malifaux, a game I've been looking at lately because of the gorgeous models and interesting card dynamic.

It was a lot of fun.

We played a very small scale game. I had Seamus the Mad Hatter and Hatter and two Rotten Belles (literally undead hookers). He was playing Nicodem the Undertaker and two Samurai-Punk Zombies (just what they sound like). I was able to kill his models, lost both Belles, and won the game. 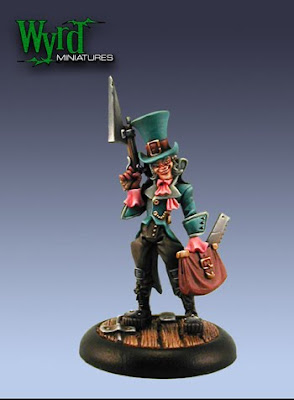 Seamus - image from Wyrd Miniatures
The game is based off of a deck of cards instead of dice. When making an attack, casting a spell, etc. you and your opponent draw the top cards from your decks, add the appropriate attack or defense stat, and compare totals. If you win the attack goes off, if your opponent wins it doesn't.

You also have a hand of cards from the deck that you can use to cheat fate. Don't like the card you drew? Replace it with a card from your hand! This dynamic gives you a little more control over things in the game than dice do.

The scale of the game is very small, usually around 6 or 7 models per side. The models themselves look great and are priced about the same as Warmachine or GW metal models.

I bought the rule books on my way home and am planning to pick up the Viktorias started box soon so I can get some games in. 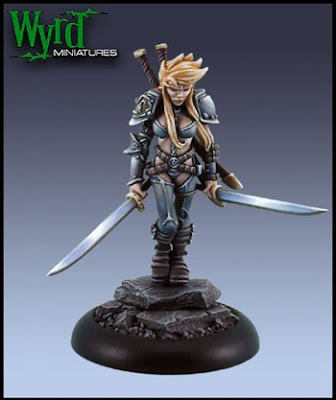 one of the Viktorias - image from Wyrd Miniatures 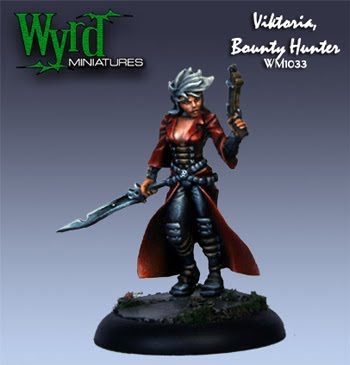 the other Viktoria - image from Wyrd Miniatures
malifaux