Posted by Simon on March 04, 2010
jack frost on the Privateer Press forums has got a pretty complete spoiler on Strakhov, the new Khador 'caster. Let's take a look! 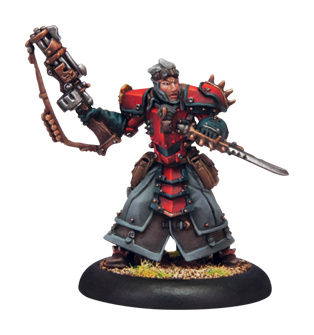 (no posted info about his CMD or health boxes)

Nothing about his stats really jump out at me, they're all pretty standard for Khadoran 'casters. If I had to guess I'd say he'll have 17 or 18 health boxes and a command of 9 but that's just me making stuff up.

Weapons (from Bell of Lost Souls):

Cinder Bomb [1x] (None) RNG: 6 ROF: 1 AOE: 3 POW: 14 Damage Type: Fire Cumbersome - If this model attacks with this weapon during its activation, it cannot attack with another ranged weapon that activation. If this model attacked with another ranged weapon this activation, it cannot attack with this weapon.
Smoke - This weaponʼs AOE is a cloud effect that remains in play for one round.

The Cinder Bomb is a very short ranged Bombard that also provides a smoke cloud. Since it is a Fire attack Strakhov is immune to the damage and can throw it for some cover, bumping himself up to a nice DEF 17 in the cloud. POW 14 isn't anything to laugh at.

Nothing spectacular here, although Sorscha is more than capable of taking out 'casters with her P+S 13 weapon. He's going to benefit from MAT boosts or having his target knocked down or debuffed a bit.

Abilities:
Alchemical Mask
He can ignore clouds when determining LOS and isn't affected by gas effects (which only Assault Kommandos have).

Sprint
This is sweet and allows him to run around the table if he manages to kill a model in melee. Shouldn't be too tough to make this work.

Immunity Fire, Immunity Corrosion
He isn't affected by his grenades and seems tailor made to take on Menoth and Cryx.

Feat:
friendly faction models that charge or slam while in strakhovs control area get +4 mov...jacks in his battlegroup can charge and slam without spending focus

That is jack's text quoted. I imagine that the actual feat text is a little more clear but it looks like the feat gives any friendly faction model +4" on a charge or slam and allows 'jacks in his battle group to charge without focus. I think the feat is pretty awesome.

Most Khador 'jacks have a SPD of 4 and a threat range of 7" on the charge. This usually means that early in the game they're getting charged, surviving, and striking back. Under this feat they have a charge threat range of 11" and can get the first charge off! And it doesn't cost focus to do it! And the extra 4" applies to my units and solos too! Manhunters with a 13" charge range, Great Bears with a 15" range - how awesome is that!

The range on this is very short and you have to push the model directly away from the spell's origin but this looks like a slightly less powerful version of Telekinesis. With some careful positioning of Strakhov I can see this being useful for opening up charge lanes.

jack's text is quoted here because it isn't hugely clear. It sounds like if a model in Strakhov's battlegroup (so him, a 'jack, or Wardog) kills a model then another model in the battlegroup can make a full advance, then Overrun expires. This could be a great way to get Strakhov out of messy situations, especially if he's already Sprinted. It could also be a great way to get a 'jack an extra 4" of movement towards a target.

Butcher has this spell and I rarely cast it. The rough terrain is nice and POW 13 is nothing to sneeze at, but the cost is so high for a FOC 6 'caster.

Sentry
like counter charge, but no range necessary and may shoot at enemy model.

Again, jack's text is quoted above because it isn't terribly clear. Counter charge lets a model charge an enemy model that ends its movement within 6". I'm not sure what would trigger the Sentry ability but it's interesting that the model can shoot or charge. Could be useful for protecting Strakhov if cast on a 'jack.

Irusk has this spell and it is awesome. I can't imagine it being any less awesome with Strakhov, especially since he's already boosting a 'jack's speed with his feat. On feat turn, a normal Khador 'jack with this spell on it can charge 4 (movement) + 3 (charge) + 4 (feat) + 2 (spell) = 13"! That's almost double the normal 7"!

Thoughts:
The feat is awesome. I don't see myself taking more than 2 heavies with him but those two heavies are going to be super fast. He doesn't buff troops at all except for Occultation (but what a great buff that is) and the SPD buff on feat turn. primarily focused on making his battle group faster. I don't see using Rift much but Battering Ram has some potential for movement shenanigans.

Here's a thought. Cast Superiority on a 'jack (assume SPD4 on the 'jack). Next turn, upkeep it. Activate Strakhov, cast Overrun on the same 'jack, feat, and have Strakhov kill something. Using Overrun, that 'jack moves 6" (Superiority bumps the SPD to 6). Activate the 'jack, pick a target, and charge. The charge range on that 'jack is 6 (Overrun) + 4 (SPD 4) + 3 (charge) + 2 (Superiority) + 4 (feat) = 19". Ninteen inches on a regular 'jack and 21" on a 'jack with Reach. We're seriously talking about half the board!

Put Stealth on the Great Bears and then send them and the Kayazys (who have Stealth already) down the flanks. Widowmakers and the Manhunter are for harassment like usual. Superiority could go on the Spriggan to make it a monster or the Kodiak to guarantee the chain attack comes off.

With the fast moving flanks and slow moving center, hopefully I can encircle the opponent's core, pop Strakhov's feat, and get a bunch of long range charges off and then mop up after.

Strakhov is the first 'caster to make me seriously consider the Decimator, pending a more clear wording on Sentry. Getting some free shots with the Decimator's gun would be sweet and the massive charge range + Sustained attack on the buzz saw could do some serious damage.

Here's a link to the theory thread about him.
khador warmachine