Posted by Simon on March 29, 2010
I played my first game this weekend against the pirates of Warmachine. My opponent hadn't played a MkII game yet and brought out a very nice looking pirates force led by Ashlynn.

I was playing a Butcher list with my new Doom Reavers. 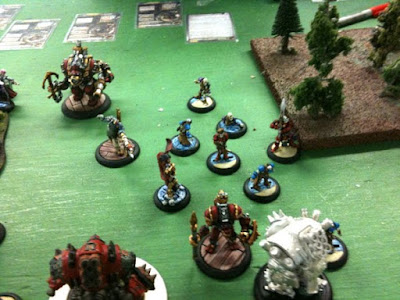 Aiyana and Holt did a number on my Doom Reavers and only one made it up field. He whiffed his one charge attack on the Talon and then died - hopefully they'll handle themselves better in the future.

I was able to take out Aiyana and Holt with the Great Bears and most of the Risen. My 'jacks handled his with no toubles. Dirty Meg survived three Widowmaker hits and dodged not one but two thrown 'jacks. 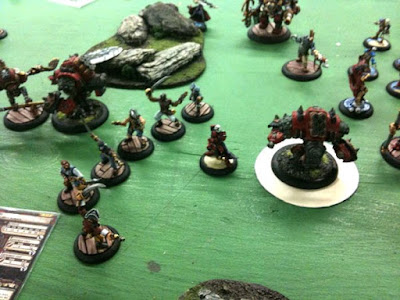 In the end I chose to ignore his Sea Dogs who had worked their way through my two Kodiaks (picture above), thinking they couldn't scratch the Butcher who was camping three focus. He charged in with four of them and after the only good rolls he had all game, three Sea Dogs did 15 points of damage to the Butcher and killed him.

My opponent is the local Malifaux rep so after this game he ran me through a demo. I'll put up another post on that later but long story short, I won, had a great time, and left the store with the rules and plans to purchase a starter box.
battle reports warmachine