Posted by Simon on April 09, 2010
I've been bitten by the Malifaux bug and my army is starting to take shape.

I liked the look of the Viktorias so I chose them as my Masters (and, consequently, Outcasts as my faction). The starter box they come in has three other models in it but, even though they look very nice, there are some other models in faction that have a very strong thematic tie-in with the Viktorias that I'm going to build my crew from. 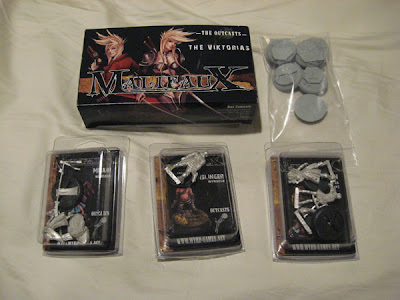 the crew in their boxes
I bought three Ronin, a Convict Gunslinger, and Misaki to round out my crew. The Convict is the only male model and also the only one who doesn't have a samurai feel, but he's a powerful model and will make my crew a little less one-dimensional. 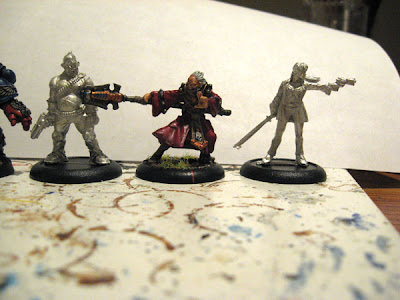 Convict Gunslinger, Orin Midwinter, Ronin - a scale shot
The Viktorias, Convict, and Misaki give me a base of 12 Soul Stones (a.k.a. points). Each Ronin is 5 points so I can add as many as I need to build up to whatever Soul Stone limit the game is.

I've wanted to try resin bases so I bought a set of 10 from Dragon Forge. The army sizes are so small that I don't feel bad basing my whole faction on them. 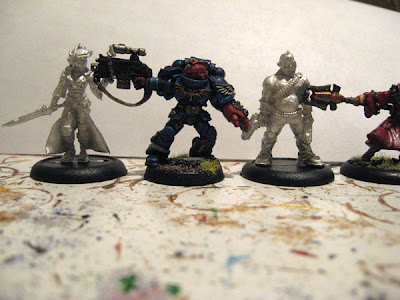 Thus far I've bought everything with money I made selling models on ebay and I have another auction up right now to make a little more. If you're a Guard player and need some more plastic Cadians I have just the thing!
ebay malifaux outcasts